What is the brain?

The brain can be defined as a complex organ located inside the skull that regulates the activities of the nervous system. It is part of the Central Nervous System (CNS) and is the most voluminous and well-known part of the brain. It is located in the front and upper part of the cranial cavity and is present in all vertebrates. Inside the skull, the brain floats in a clear fluid called cerebrospinal fluid, which performs protective functions, both natural and immune. 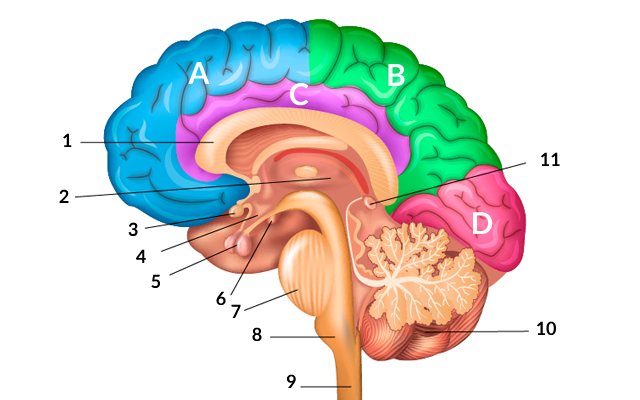 Above is the human brain which consists of the following parts:

The brain consists of cortical and subcortical structures (which are hidden under the cerebral cortex. The cortical structures or cerebral cortex are divided into different lobes: the frontal lobe (A), the parietal lobe (B), the temporal cortex. the occipital (D), temporal and islet cortex (these two are hidden in the image) .In addition, these lobes are divided in half into two hemispheres: the right and the left. the cerebral cortex, such as the cortex (1) that connects the two hemispheres, the chamber (2), the basal ganglia, the amygdala, and the mammalian bodies (6) .The brain is responsible for integrating all the information received from the sensory organs and organize a response.Controls motor functions, emotional and all higher cognitive functions: reasoning, emotional expression, memory (Squire, 1992), learning

The epiphysis plays a very important role in synchronizing the release of the hormone melatonin and in the regulation of sleep / wake, for which it is coordinated with the visual chiasm (3). The brainstem: consists of the upper end of the spinal cord (9). It consists of the spine (8), the protrusion (7) and the midbrain. The brainstem controls automatic functions, such as blood pressure or heart rate, limb movements, and visceral functions, such as digestion or urination. €40,00 €49,60 με ΦΠΑ 203310
About 3 times life sizeThis is an accurate model of outer, middle and inner ear. With tympanic membrane ossicles semicircular
Add to wishlist
Add to cart
Quick view
Shopping cart
close
We use cookies to improve your experience on our website. By browsing this website, you agree to our use of cookies.
Accept