Acetic acid is the second simplest carboxylic acid (after formic acid) and its functional group is methyl. It is an important chemical reagent and industrial chemical, used primarily in the production of cellulose acetate for photographic film, polyvinyl acetate for wood glue, and synthetic fibres and fabrics. In households, diluted acetic acid is often used in descaling agents. In the food industry, acetic acid is controlled by the food additive code E260 as an acidity regulator and as a condiment. In biochemistry, the acetyl group, derived from acetic acid, is fundamental to all forms of life. When bound to coenzyme A, it is central to the metabolism of carbohydrates and fats.

The global demand for acetic acid is about 6.5 million metric tons per year (t/a), of which approximately 1.5 t/a is met by recycling; the remainder is manufactured from methanol.[8] Vinegar is mostly dilute acetic acid, often produced by fermentation and subsequent oxidation of ethanol. 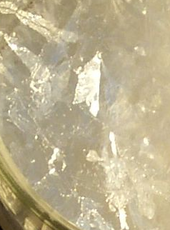 The hydrogen centre in the carboxyl group (−COOH) in carboxylic acids such as acetic acid can separate from the molecule by ionization:

Because of this release of the proton (H+), acetic acid has acidic character. Acetic acid is a weak monoprotic acid. In aqueous solution, it has a pKa value of 4.76. Its conjugate base is acetate (CH3COO−). A 1.0 M solution (about the concentration of domestic vinegar) has a pH of 2.4, indicating that merely 0.4% of the acetic acid molecules are dissociated. However, in very dilute (< 10−6 M) solution acetic acid is >90% dissociated.

In solid acetic acid, the molecules form chains, individual molecules being interconnected by hydrogen bonds. In the vapour at 120 °C (248 °F), dimers can be detected. Dimers also occur in the liquid phase in dilute solutions in non-hydrogen-bonding solvents, and a certain extent in pure acetic acid, but are disrupted by hydrogen-bonding solvents. The dissociation enthalpy of the dimer is estimated at 65.0–66.0 kJ/mol, and the dissociation entropy at 154–157 J mol−1 K−1. Other carboxylic acids engage in similar intermolecular hydrogen bonding interactions.

Vinyl acetate can be polymerised to polyvinyl acetate or other polymers, which are components in paints and adhesives.

The major esters of acetic acid are commonly used as solvents for inks, paints and coatings. The esters include ethyl acetate, n–butyl acetate, isobutyl acetate, and propyl acetate. They are typically produced by catalyzed reaction from acetic acid and the corresponding alcohol:

Acetic acid is often used as a solvent for reactions involving carbocations, such as Friedel-Crafts alkylation. For example, one stage in the commercial manufacture of synthetic camphor involves a Wagner-Meerwein rearrangement of camphene to isobornyl acetate; here acetic acid acts both as a solvent and as a nucleophile to trap the rearranged carbocation.

Acetic acid injection into a tumor has been used to treat cancer since the 1800s.

Acetic acid is used as part of cervical cancer screening in many areas in the developing world. The acid is applied to the cervix and if an area of white appears after about a minute the test is positive.

Acetic acid is an effective antiseptic when used as a 1% solution, with broad spectrum of activity against streptococci, staphylococci, pseudomonas, enterococci and others. It may be used to treat skin infections caused by pseudomonas strains resistant to typical antibiotics.

While diluted acetic acid is used in iontophoresis, no high quality evidence supports this treatment for rotator cuff disease.

As a treatment for otitis externa, it is on the World Health Organization’s List of Essential Medicines.

Acetic acid has 349 kcal (1,460 kJ) per 100 g. Vinegar is typically no less than 4% acetic acid by mass. Legal limits on acetic acid content vary by jurisdiction. Vinegar is used directly as a condiment, and in the pickling of vegetables and other foods. Table vinegar tends to be more diluted (4% to 8% acetic acid), while commercial food pickling employs solutions that are more concentrated. The proportion of acetic acid used worldwide as vinegar is not as large as commercial uses, but is by far the oldest and best-known application

€9,00 €11,16 με ΦΠΑ 330180
Sodium Sulfide (500gr) Sodium Sulfide is the chemical compound with the formula Na2S, or more commonly its hydrate Na2S·9H2O. Both the anhydrous and the hydrated salts are
Add to wishlist
Add to cart
Quick view