Nitric acid is the primary reagent used for nitration – the addition of a nitro group, typically to an organic molecule. While some resulting nitro compounds are shock- and thermally-sensitive explosives, a few are stable enough to be used in munitions and demolition, while others are still more stable and used as pigments in inks and dyes. Nitric acid is also commonly used as a strong oxidizing agent.

Commercially available nitric acid is an azeotrope with water at a concentration of 68% HNO3. This solution has a boiling temperature of 120.5 °C (249 °F) at 1 atm. It is known as “concentrated nitric acid”. The azeotrope of nitric acid and water is a colourless liquid at room temperature. 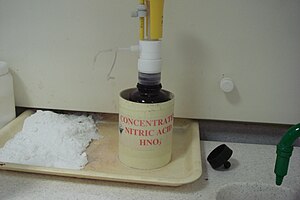 Nitric acid in a laboratory

In organic synthesis, industrial and otherwise, the nitro group is a versatile functional group. A mixture of nitric and sulfuric acids introduces a nitro substituent onto various aromatic compounds by electrophilic aromatic substitution. Many explosives, such as TNT, are prepared this way:

Either concentrated sulfuric acid or oleum absorbs the excess water.

The nitro group can be reduced to give an amine group, allowing synthesis of aniline compounds from various nitrobenzenes:

Use as an oxidant

The precursor to nylon, adipic acid, is produced on a large scale by oxidation of “KA oil”—a mixture of cyclohexanone and cyclohexanol—with nitric acid.

Nitric acid can be used to convert metals to oxidized forms, such as converting copper metal to cupric nitrate. It can also be used in combination with hydrochloric acid as aqua regia to dissolve noble metals such as gold (as chloroauric acid). These salts can be used to purify gold and other metals beyond 99.9% purity by processes of recrystallization and selective precipitation. Its ability to dissolve certain metals selectively or be a solvent for many metal salts makes it useful in gold parting processes.

In elemental analysis by ICP-MS, ICP-AES, GFAA, and Flame AA, dilute nitric acid (0.5–5.0%) is used as a matrix compound for determining metal traces in solutions. Ultrapure trace metal grade acid is required for such determination, because small amounts of metal ions could affect the result of the analysis.

It is also typically used in the digestion process of turbid water samples, sludge samples, solid samples as well as other types of unique samples which require elemental analysis via ICP-MS, ICP-OES, ICP-AES, GFAA and flame atomic absorption spectroscopy. Typically these digestions use a 50% solution of the purchased HNO3 mixed with Type 1 DI Water.

In electrochemistry, nitric acid is used as a chemical doping agent for organic semiconductors, and in purification processes for raw carbon nanotubes.

In a low concentration (approximately 10%), nitric acid is often used to artificially age pine and maple. The color produced is a grey-gold very much like very old wax- or oil-finished wood (wood finishing).

The corrosive effects of nitric acid are exploited for some specialty applications, such as etching in printmaking, pickling stainless steel or cleaning silicon wafers in electronics.

A solution of nitric acid, water and alcohol, Nital, is used for etching metals to reveal the microstructure. ISO 14104 is one of the standards detailing this well known procedure.

Nitric acid is used either in combination with hydrochloric acid or alone to clean glass cover slips and glass slides for high-end microscopy applications. It is also used to clean glass before silvering when making silver mirrors.

Commercially available aqueous blends of 5–30% nitric acid and 15–40% phosphoric acid are commonly used for cleaning food and dairy equipment primarily to remove precipitated calcium and magnesium compounds (either deposited from the process stream or resulting from the use of hard water during production and cleaning). The phosphoric acid content helps to passivate ferrous alloys against corrosion by the dilute nitric acid.[citation needed]

Nitric acid can be used as a spot test for alkaloids like LSD, giving a variety of colours depending on the alkaloid.

Nitric acid plays a key role in PUREX and other nuclear fuel reprocessing methods, where it can dissolve many different actinides. The resulting nitrates are converted to various complexes that can be reacted and extracted selectively in order to separate the metals from each other.

Nitric acid is a corrosive acid and a powerful oxidizing agent. The major hazard posed by it is chemical burns, as it carries out acid hydrolysis with proteins (amide) and fats (ester), which consequently decomposes living tissue (e.g. skin and flesh). Concentrated nitric acid stains human skin yellow due to its reaction with the keratin. These yellow stains turn orange when neutralized. Systemic effects are unlikely, and the substance is not considered a carcinogen or mutagen.

The standard first-aid treatment for acid spills on the skin is, as for other corrosive agents, irrigation with large quantities of water. Washing is continued for at least 10–15 minutes to cool the tissue surrounding the acid burn and to prevent secondary damage. Contaminated clothing is removed immediately and the underlying skin washed thoroughly.

Being a strong oxidizing agent, nitric acid can react violently with many compounds.

Use in acid attacks

Nitric acid is one of the most common types of acid used in acid attacks.