Pure sulfuric acid does not exist naturally on Earth due to its strong affinity to water vapor; for this reason, it is hygroscopic and readily absorbs water vapor from the air. Concentrated sulfuric acid is highly corrosive towards other materials, from rocks to metals, since it is an oxidant with powerful dehydrating properties. Phosphorus pentoxide is a notable exception in that it is not dehydrated by sulfuric acid, but to the contrary dehydrates sulfuric acid to sulfur trioxide. Upon addition of sulfuric acid to water, a considerable amount of heat is released; thus the reverse procedure of adding water to the acid should not be performed since the heat released may boil the solution, spraying droplets of hot acid during the process. Upon contact with body tissue, sulfuric acid can cause severe acidic chemical burns and even secondary thermal burns due to dehydration. Dilute sulfuric acid is substantially less hazardous without the oxidative and dehydrating properties; however, it should still be handled with care for its acidity.

Sulfuric acid is a very important commodity chemical, and a nation’s sulfuric acid production is a good indicator of its industrial strength. It is widely produced with different methods, such as contact process, wet sulfuric acid process, lead chamber process and some other methods. Sulfuric acid is also a key substance in the chemical industry. It is most commonly used in fertilizer manufacture, but is also important in mineral processing, oil refining, wastewater processing, and chemical synthesis. It has a wide range of end applications including in domestic acidic drain cleaners, as an electrolyte in lead-acid batteries, in dehydrating a compound, and in various cleaning agents. Sulfuric acid can be obtained by dissolving sulfur trioxide in water.

In the solid state, sulfuric acid is a molecular solid that forms monoclinic crystals with nearly trigonal lattice parameters. The structure consists of layers parallel to the (010) plane, in which each molecule is connected by hydrogen bonds to two others. Hydrates H2SO4·nH2O are known for n = 1, 2, 3, 4, 6.5, and 8, although most intermediate hydrates are stable against disproportionation.

Sulfuric acid is a very important commodity chemical, and indeed, a nation’s sulfuric acid production is a good indicator of its industrial strength. World production in the year 2004 was about 180 million tonnes, with the following geographic distribution: Asia 35%, North America (including Mexico) 24%, Africa 11%, Western Europe 10%, Eastern Europe and Russia 10%, Australia and Oceania 7%, South America 7%. Most of this amount (≈60%) is consumed for fertilizers, particularly superphosphates, ammonium phosphate and ammonium sulfates. About 20% is used in chemical industry for production of detergents, synthetic resins, dyestuffs, pharmaceuticals, petroleum catalysts, insecticides and antifreeze, as well as in various processes such as oil well acidicizing, aluminium reduction, paper sizing, and water treatment. About 6% of uses are related to pigments and include paints, enamels, printing inks, coated fabrics and paper, while the rest is dispersed into a multitude of applications such as production of explosives, cellophane, acetate and viscose textiles, lubricants, non-ferrous metals, and batteries. 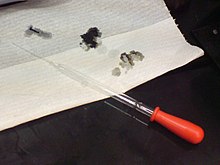 Drops of 98% sulfuric acid char a piece of tissue paper instantly. Carbon is left after the dehydration reaction staining the paper black. 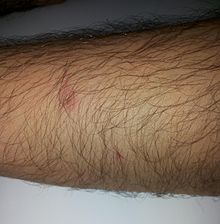 Sulfuric acid is capable of causing very severe burns, especially when it is at high concentrations. In common with other corrosive acids and alkali, it readily decomposes proteins and lipids through amide and ester hydrolysis upon contact with living tissues, such as skin and flesh. In addition, it exhibits a strong dehydrating property on carbohydrates, liberating extra heat and causing secondary thermal burns. Accordingly, it rapidly attacks the cornea and can induce permanent blindness if splashed onto eyes. If ingested, it damages internal organs irreversibly and may even be fatal. Protective equipment should hence always be used when handling it. Moreover, its strong oxidizing property makes it highly corrosive to many metals and may extend its destruction on other materials. Because of such reasons, damage posed by sulfuric acid is potentially more severe than that by other comparable strong acids, such as hydrochloric acid and nitric acid.

Sulfuric acid must be stored carefully in containers made of nonreactive material (such as glass). Solutions equal to or stronger than 1.5 M are labeled “CORROSIVE”, while solutions greater than 0.5 M but less than 1.5 M are labeled “IRRITANT”. However, even the normal laboratory “dilute” grade (approximately 1 M, 10%) will char paper if left in contact for a sufficient time.

The standard first aid treatment for acid spills on the skin is, as for other corrosive agents, irrigation with large quantities of water. Washing is continued for at least ten to fifteen minutes to cool the tissue surrounding the acid burn and to prevent secondary damage. Contaminated clothing is removed immediately and the underlying skin washed thoroughly.

Preparation of the diluted acid can be dangerous due to the heat released in the dilution process. To avoid splattering, the concentrated acid is usually added to water and not the other way around. A saying used to remember this is “Do like you oughta, add the acid to the water”. Water has a higher heat capacity than the acid, and so a vessel of cold water will absorb heat as acid is added.

Also, because the acid is denser than water, it sinks to the bottom. Heat is generated at the interface between acid and water, which is at the bottom of the vessel. Acid will not boil, because of its higher boiling point. Warm water near the interface rises due to convection, which cools the interface, and prevents boiling of either acid or water.

Preparation of solutions greater than 6 M (35%) in concentration is most dangerous, because the heat produced may be sufficient to boil the diluted acid: efficient mechanical stirring and external cooling (such as an ice bath) are essential.

Reaction rates double for about every 10-degree Celsius increase in temperature. Therefore, the reaction will become more violent as dilution proceeds, unless the mixture is given time to cool. Adding acid to warm water will cause a violent reaction.

On a laboratory scale, sulfuric acid can be diluted by pouring concentrated acid onto crushed ice made from de-ionized water. The ice melts in an endothermic process while dissolving the acid. The amount of heat needed to melt the ice in this process is greater than the amount of heat evolved by dissolving the acid so the solution remains cold. After all the ice has melted, further dilution can take place using water.

The main occupational risks posed by this acid are skin contact leading to burns (see above) and the inhalation of aerosols. Exposure to aerosols at high concentrations leads to immediate and severe irritation of the eyes, respiratory tract and mucous membranes: this ceases rapidly after exposure, although there is a risk of subsequent pulmonary edema if tissue damage has been more severe. At lower concentrations, the most commonly reported symptom of chronic exposure to sulfuric acid aerosols is erosion of the teeth, found in virtually all studies: indications of possible chronic damage to the respiratory tract are inconclusive as of 1997. Repeated occupational exposure to sulfuric acid mists may increase the chance of lung cancer by up to 64 percent. In the United States, the permissible exposure limit (PEL) for sulfuric acid is fixed at 1 mg/m3: limits in other countries are similar. There have been reports of sulfuric acid ingestion leading to vitamin B12 deficiency with subacute combined degeneration. The spinal cord is most often affected in such cases, but the optic nerves may show demyelination, loss of axons and gliosis. 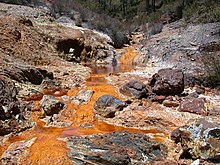 Pure sulfuric acid is not encountered naturally on Earth in anhydrous form, due to its great affinity for water. Dilute sulfuric acid is a constituent of acid rain, which is formed by atmospheric oxidation of sulfur dioxide in the presence of water – i.e. oxidation of sulfurous acid. When sulfur-containing fuels such as coal or oil are burned, sulfur dioxide is the main byproduct (besides the chief products carbon oxides and water).

Sulfuric acid is formed naturally by the oxidation of sulfide minerals, such as iron sulfide. The resulting water can be highly acidic and is called acid mine drainage (AMD) or acid rock drainage (ARD). This acidic water is capable of dissolving metals present in sulfide ores, which results in brightly colored, toxic solutions.