Treating the solution of different soluble magnesium salts with alkaline water induces the precipitation of the solid hydroxide Mg(OH)2: Mg2+ + 2OH− → Mg(OH)2As Mg2+ is the second most abundant cation present in seawater after Na+, it can be economically extracted directly from seawater by alkalinisation as described here above. On an industrial scale, Mg(OH)2 is produced by treating seawater with lime (Ca(OH)2). A volume of 600 m3 (or 160,000 US gallons) of seawater gives about one ton of Mg(OH)2. Ca(OH)2 (Ksp = 5.02×10−6) is far more soluble than Mg(OH)2 (Ksp = 5.61×10−12) and drastically increases the pH value of seawater from 8.2 to 12.5. The less soluble Mg(OH)2 precipitates because of the common ion effect due to the OH−
added by the dissolution of Ca(OH)2: Mg2+ + Ca(OH)2 → Mg(OH)2 + Ca2+

Most Mg(OH)2 that is produced industrially, as well as the small amount that is mined, is converted to fused magnesia (MgO). Magnesia is valuable because it is both a poor electrical conductor and an excellent thermal conductor. 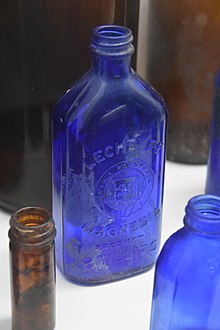 As an antacid, magnesium hydroxide is dosed at approximately 0.5–1.5 g in adults and works by simple neutralization, in which the hydroxide ions from the Mg(OH)2 combine with acidic H+ ions (or hydronium ions) produced in the form of hydrochloric acid by parietal cells in the stomach, to produce water.

As a laxative, magnesium hydroxide is dosed at 2–5 g, and works in a number of ways. First, Mg2+ is poorly absorbed from the intestinal tract, so it draws water from the surrounding tissue by osmosis. Not only does this increase in water content soften the feces, it also increases the volume of feces in the intestine (intraluminal volume) which naturally stimulates intestinal motility. Furthermore, Mg2+ ions cause the release of cholecystokinin (CCK), which results in intraluminal accumulation of water and electrolytes, and increased intestinal motility. Some sources claim that the hydroxide ions themselves do not play a significant role in the laxative effects of milk of magnesia, as basic solutions (i.e. solutions of hydroxide ions) are not strongly laxative, and non-basic Mg2+ solutions, like MgSO4, are equally strong laxatives, mole for mole.

History of milk of magnesia

On May 4, 1818, American inventor John Callen received a patent (No. X2952) for magnesium hydroxide. In 1829, Sir James Murray used a “condensed solution of fluid magnesia” preparation of his own design to treat the Lord Lieutenant of Ireland, the Marquess of Anglesey, for stomach pain. This was so successful (advertised in Australia and approved by the Royal College of Surgeons in 1838) that he was appointed resident physician to Anglesey and two subsequent Lords Lieutenant, and knighted. His fluid magnesia product was patented two years after his death, in 1873.

The term milk of magnesia was first used by Charles Henry Phillips in 1872 for a suspension of magnesium hydroxide formulated at about 8% w/v. It was sold under the brand name Phillips’ Milk of Magnesia for medicinal usage.

It is added directly to human food, and is affirmed as generally recognized as safe by the FDA. It is known as E number E528.

Magnesium hydroxide is marketed for medical use as chewable tablets, as capsules, powder, and as liquid suspensions, sometimes flavored. These products are sold as antacids to neutralize stomach acid and relieve indigestion and heartburn. It also is a laxative to alleviate constipation. As a laxative, the osmotic force of the magnesia acts to draw fluids from the body. High doses can lead to diarrhea, and can deplete the body’s supply of potassium, sometimes leading to muscle cramps.

Magnesium hydroxide powder is used industrially to neutralize acidic wastewaters. It is also a component of the Biorock method of building artificial reefs. The main advantage of Mg(OH)2 over Ca(OH)2, is to impose a lower pH better compatible with that of seawater and sea life: pH 10.5 for Mg(OH)2 in place of pH 12.5 with Ca(OH)2.

Brucite, the mineral form of Mg(OH)2 commonly found in nature also occurs in the 1:2:1 clay minerals amongst others, in chlorite, in which it occupies the interlayer position normally filled by monovalent and divalent cations such as Na+, K+, Mg2+ and Ca2+. As a consequence, chlorite interlayers are cemented by brucite and cannot swell nor shrink.

Brucite, in which some of the Mg2+ cations have been substituted by Al3+ cations, becomes positively charged and constitutes the main basis of layered double hydroxide (LDH). LDH minerals as hydrotalcite are powerful anion sorbents but are relatively rare in nature.

Brucite may also crystallise in cement and concrete in contact with seawater. Indeed, the Mg2+ cation is the second most abundant cation in seawater, just behind Na+ and before Ca2+. Because brucite is a swelling mineral, it causes a local volumetric expansion responsible for tensile stress in concrete. This leads to the formation of cracks and fissures in concrete, accelerating its degradation in seawater.

For the same reason, dolomite cannot be used as construction aggregate for making concrete. The reaction of magnesium carbonate with the free alkali hydroxides present in the cement porewater also leads to the formation of expansive brucite.

This reaction, one of the two main alkali–aggregate reaction (AAR) is also known as alkali–carbonate reaction.