Sodium Hydroxide, also known as lye and caustic soda, is an inorganic compound with the formula NaOH. It is a white solid ionic compound consisting of sodium cations Na+
and hydroxide anions OH−.

Sodium hydroxide is a highly caustic base and alkali that decomposes proteins at ordinary ambient temperatures and may cause severe chemical burns. It is highly soluble in water, and readily absorbs moisture and carbon dioxide from the air. It forms a series of hydrates NaOH·nH2O. The monohydrate NaOH·H2O crystallizes from water solutions between 12.3 and 61.8 °C. The commercially available “sodium hydroxide” is often this monohydrate, and published data may refer to it instead of the anhydrous compound. As one of the simplest hydroxides, it is frequently utilized alongside neutral water and acidic hydrochloric acid to demonstrate the pH scale to chemistry students.

Sodium hydroxide is used in many industries: in the manufacture of pulp and paper, textiles, drinking water, soaps and detergents, and as a drain cleaner. Worldwide production in 2004 was approximately 60 million tonnes, while demand was 51 million tonnes.

Pure sodium hydroxide is a colorless crystalline solid that melts at 318 °C (604 °F) without decomposition, and with a boiling point of 1,388 °C (2,530 °F). It is highly soluble in water, with a lower solubility in polar solvents such as ethanol and methanol. NaOH is insoluble in ether and other non-polar solvents.

Similar to the hydration of sulfuric acid, dissolution of solid sodium hydroxide in water is a highly exothermic reaction where a large amount of heat is liberated, posing a threat to safety through the possibility of splashing. The resulting solution is usually colorless and odorless. As with other alkaline solutions, it feels slippery with skin contact due to the process of saponification that occurs between NaOH and natural skin oils.

This process was superseded by the Solvay process in the late 19th century, which was in turn supplanted by the Leblanc process and then chloralkali process which is in use today.

Sodium hydroxide is also produced by combining pure sodium metal with water. The byproducts are hydrogen gas and heat, often resulting in a flame.

This reaction is commonly used for demonstrating the reactivity of alkali metals in academic environments; however, it is not commercially viable, as the isolation of sodium metal is typically performed by reduction or electrolysis of sodium compounds including sodium hydroxide.

Sodium hydroxide is a popular strong base used in industry. Sodium hydroxide is used in the manufacture of sodium salts and detergents, pH regulation, and organic synthesis. In bulk, it is most often handled as an aqueous solution, since solutions are cheaper and easier to handle.

Sodium hydroxide is used in many scenarios where it is desirable to increase the alkalinity of a mixture, or to neutralize acids.

For example, in the petroleum industry, sodium hydroxide is used as an additive in drilling mud to increase alkalinity in bentonite mud systems, to increase the mud viscosity, and to neutralize any acid gas (such as hydrogen sulfide and carbon dioxide) which may be encountered in the geological formation as drilling progresses.

Another use is in Salt spray testing where pH needs to be regulated. Sodium hydroxide is used with hydrochloric acid to balance pH. The resultant salt, NaCl, is the corrosive agent used in the standard neutral pH salt spray test.

Poor quality crude oil can be treated with sodium hydroxide to remove sulfurous impurities in a process known as caustic washing. As above, sodium hydroxide reacts with weak acids such as hydrogen sulfide and mercaptans to yield non-volatile sodium salts, which can be removed. The waste which is formed is toxic and difficult to deal with, and the process is banned in many countries because of this. In 2006, Trafigura used the process and then dumped the waste in Ivory Coast.

Other common uses of sodium hydroxide include:

Sodium hydroxide is also widely used in pulping of wood for making paper or regenerated fibers. Along with sodium sulfide, sodium hydroxide is a key component of the white liquor solution used to separate lignin from cellulose fibers in the kraft process. It also plays a key role in several later stages of the process of bleaching the brown pulp resulting from the pulping process. These stages include oxygen delignification, oxidative extraction, and simple extraction, all of which require a strong alkaline environment with a pH > 10.5 at the end of the stages. 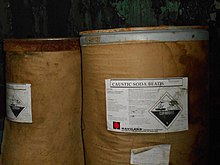 Sodium hydroxide is often stored in bottles for small-scale laboratory use, within intermediate bulk containers (medium volume containers) for cargo handling and transport, or within large stationary storage tanks with volumes up to 100,000 gallons for manufacturing or waste water plants with extensive NaOH use. Common materials that are compatible with sodium hydroxide and often utilized for NaOH storage include: polyethylene (HDPE, usual, XLPE, less common), carbon steel, polyvinyl chloride (PVC), stainless steel, and fiberglass reinforced plastic (FRP, with a resistant liner).

Sodium hydroxide must be stored in airtight containers to preserve its normality as it will absorb water from the atmosphere.

Sodium hydroxide was first prepared by soap makers.: p45  A procedure for making sodium hydroxide appeared as part of a recipe for making soap in an Arab book of the late 13th century: Al-mukhtara’ fi funun min al-suna’ (Inventions from the Various Industrial Arts), which was compiled by al-Muzaffar Yusuf ibn ‘Umar ibn ‘Ali ibn Rasul (d. 1295), a king of Yemen. The recipe called for passing water repeatedly through a mixture of alkali (Arabic: al-qily, where qily is ash from saltwort plants, which are rich in sodium; hence alkali was impure sodium carbonate) and quicklime (calcium oxide, CaO), whereby a solution of sodium hydroxide was obtained. European soap makers also followed this recipe. When in 1791 the French chemist and surgeon Nicolas Leblanc (1742–1806) patented a process for mass-producing sodium carbonate, natural “soda ash” (impure sodium carbonate that was obtained from the ashes of plants that are rich in sodium): p36  was replaced by this artificial version.: p46  However, by the 20th century, the electrolysis of sodium chloride had become the primary method for producing sodium hydroxide.