Aluminium (powder) (aluminum in American and Canadian English) is a chemical element with the symbol Al and atomic number 13. It has a density lower than those of other common metals, at approximately one third that of steel. It has a great affinity towards oxygen, and forms a protective layer of oxide on the surface when exposed to air. Aluminium visually resembles silver, both in its color and in its great ability to reflect light. It is soft, non-magnetic and ductile. It has one stable isotope, 27Al; this isotope is very common, making aluminium the twelfth most common element in the Universe. The radioactivity of 26Al is used in radiodating.

Chemically, aluminium is a post-transition metal in the boron group; as is common for the group, aluminium forms compounds primarily in the +3 oxidation state. The aluminium cation Al3+ is small and highly charged; as such, it is polarizing, and bonds aluminium forms tend towards covalency. The strong affinity towards oxygen leads to aluminium’s common association with oxygen in nature in the form of oxides; for this reason, aluminium is found on Earth primarily in rocks in the crust, where it is the third most abundant element after oxygen and silicon, rather than in the mantle, and virtually never as the free metal.

The discovery of aluminium was announced in 1825 by Danish physicist Hans Christian Ørsted. The first industrial production of aluminium was initiated by French chemist Henri Étienne Sainte-Claire Deville in 1856. Aluminium became much more available to the public with the Hall–Héroult process developed independently by French engineer Paul Héroult and American engineer Charles Martin Hall in 1886, and the mass production of aluminium led to its extensive use in industry and everyday life. In World Wars I and II, aluminium was a crucial strategic resource for aviation. In 1954, aluminium became the most produced non-ferrous metal, surpassing copper. Most aluminium was consumed in transportation, engineering, construction, and packaging in the United States, Western Europe, and Japan.

Despite its prevalence in the environment, no living organism is known to use aluminium salts metabolically, but aluminium is well tolerated by plants and animals. Because of the abundance of these salts, the potential for a biological role for them is of continuing interest, and studies continue.

Aluminium’s per-particle abundance in the Solar System is 3.15 ppm (parts per million). It is the twelfth most abundant of all elements and third most abundant among the elements that have odd atomic numbers, after hydrogen and nitrogen. The only stable isotope of aluminium, 27Al, is the eighteenth most abundant nucleus in the Universe. It is created almost entirely after fusion of carbon in massive stars that will later become Type II supernovas: this fusion creates 26Mg, which, upon capturing free protons and neutrons becomes aluminium. Some smaller quantities of 27Al are created in hydrogen burning shells of evolved stars, where 26Mg can capture free protons. Essentially all aluminium now in existence is 27Al. 26Al was present in the early Solar System with abundance of 0.005% relative to 27Al but its half-life of 728,000 years is too short for any original nuclei to survive; 26Al is therefore extinct. Unlike for 27Al, hydrogen burning is the primary source of 26Al, with the nuclide emerging after a nucleus of 25Mg catches a free proton. 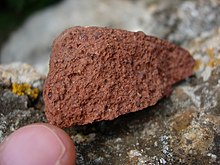 Bauxite, a major aluminium ore. The red-brown color is due to the presence of iron oxide minerals.

Because of its strong affinity for oxygen, aluminium is almost never found in the elemental state; instead it is found in oxides or silicates. Feldspars, the most common group of minerals in the Earth’s crust, are aluminosilicates. Aluminium also occurs in the minerals beryl, cryolite, garnet, spinel, and turquoise. Impurities in Al2O3, such as chromium and iron, yield the gemstones ruby and sapphire, respectively. Native aluminium metal is extremely rare and can only be found as a minor phase in low oxygen fugacity environments, such as the interiors of certain volcanoes. Native aluminium has been reported in cold seeps in the northeastern continental slope of the South China Sea. It is possible that these deposits resulted from bacterial reduction of tetrahydroxoaluminate Al(OH)4−.

Although aluminium is a common and widespread element, not all aluminium minerals are economically viable sources of the metal. Almost all metallic aluminium is produced from the ore bauxite (AlOx(OH)3–2x). Bauxite occurs as a weathering product of low iron and silica bedrock in tropical climatic conditions. In 2017, most bauxite was mined in Australia, China, Guinea, and India.

Aluminium is almost always alloyed, which markedly improves its mechanical properties, especially when tempered. For example, the common aluminium foils and beverage cans are alloys of 92% to 99% aluminium. The main alloying agents are copper, zinc, magnesium, manganese, and silicon (e.g., duralumin) with the levels of other metals in a few percent by weight. Aluminium, both wrought and cast, has been alloyed with: manganese, silicon, magnesium, copper and zinc among others. The Kynal family of alloys was developed by the British chemical manufacturer Imperial Chemical Industries.

The major uses for aluminium metal are in:

€11,29 €14,00 με ΦΠΑ 330060
Aluminum (powder) (100gr) Aluminum (powder) (aluminum in American and Canadian English) is a chemical element with the symbol Al and atomic number 13. Aluminium has a density lower than those of
Add to wishlist
Add to cart
Quick view