Sodium is a chemical element with the symbol Na (from Latin natrium) and atomic number 11. It is a soft, silvery-white, highly reactive metal. Sodium is an alkali metal, being in group 1 of the periodic table. Its only stable isotope is 23Na. The free metal does not occur in nature, and must be prepared from compounds. Sodium is the sixth most abundant element in the Earth’s crust and exists in numerous minerals such as feldspars, sodalite, and halite (NaCl). Many salts of sodium are highly water-soluble: sodium ions have been leached by the action of water from the Earth’s minerals over eons, and thus sodium and chlorine are the most common dissolved elements by weight in the oceans.

Sodium was first isolated by Humphry Davy in 1807 by the electrolysis of sodium hydroxide. Among many other useful sodium compounds, sodium hydroxide (lye) is used in soap manufacture, and sodium chloride (edible salt) is a de-icing agent and a nutrient for animals including humans.

By means of the sodium-potassium pump, living human cells pump three sodium ions out of the cell in exchange for two potassium ions pumped in; comparing ion concentrations across the cell membrane, inside to outside, potassium measures about 40:1, and sodium, about 1:10. In nerve cells, the electrical charge across the cell membrane enables transmission of the nerve impulse—an action potential—when the charge is dissipated; sodium plays a key role in that activity.

Though metallic sodium has some important uses, the major applications for sodium use compounds; millions of tons of sodium chloride, hydroxide, and carbonate are produced annually. Sodium chloride is extensively used for anti-icing and de-icing and as a preservative; examples of the uses of sodium bicarbonate include baking, as a raising agent, and sodablasting. Along with potassium, many important medicines have sodium added to improve their bioavailability; though potassium is the better ion in most cases, sodium is chosen for its lower price and atomic weight. Sodium hydride is used as a base for various reactions (such as the aldol reaction) in organic chemistry, and as a reducing agent in inorganic chemistry.

Metallic sodium is used mainly for the production of sodium borohydride, sodium azide, indigo, and triphenylphosphine. A once-common use was the making of tetraethyllead and titanium metal; because of the move away from TEL and new titanium production methods, the production of sodium declined after 1970. Sodium is also used as an alloying metal, an anti-scaling agent, and as a reducing agent for metals when other materials are ineffective.

Note the free element is not used as a scaling agent, ions in the water are exchanged for sodium ions. Sodium plasma (“vapor”) lamps are often used for street lighting in cities, shedding light that ranges from yellow-orange to peach as the pressure increases. By itself or with potassium, sodium is a desiccant; it gives an intense blue coloration with benzophenone when the desiccate is dry.

In organic synthesis, sodium is used in various reactions such as the Birch reduction, and the sodium fusion test is conducted to qualitatively analyse compounds. Sodium reacts with alcohol and gives alkoxides, and when sodium is dissolved in ammonia solution, it can be used to reduce alkynes to trans-alkenes. Lasers emitting light at the sodium D line are used to create artificial laser guide stars that assist in the adaptive optics for land-based visible-light telescopes. 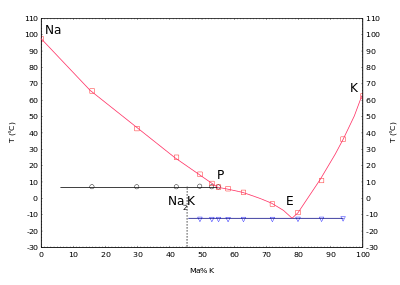 Liquid sodium is used as a heat transfer fluid in some types of nuclear reactors because it has the high thermal conductivity and low neutron absorption cross section required to achieve a high neutron flux in the reactor. The high boiling point of sodium allows the reactor to operate at ambient (normal) pressure, but the drawbacks include its opacity, which hinders visual maintenance, and its explosive properties.

Radioactive sodium-24 may be produced by neutron bombardment during operation, posing a slight radiation hazard; the radioactivity stops within a few days after removal from the reactor. If a reactor needs to be shut down frequently, NaK is used. Because NaK is a liquid at room temperature, the coolant does not solidify in the pipes.

In this case, the pyrophoricity of potassium requires extra precautions to prevent and detect leaks. Another heat transfer application is poppet valves in high-performance internal combustion engines; the valve stems are partially filled with sodium and work as a heat pipe to cool the valves.

Sodium forms flammable hydrogen and caustic sodium hydroxide on contact with water; ingestion and contact with moisture on skin, eyes or mucous membranes can cause severe burns. Sodium spontaneously explodes in the presence of water due to the formation of hydrogen (highly explosive) and sodium hydroxide (which dissolves in the water, liberating more surface). However, sodium exposed to air and ignited or reaching autoignition (reported to occur when a molten pool of sodium reaches about 290 °C, 554 °F) displays a relatively mild fire.

In the case of massive (non-molten) pieces of sodium, the reaction with oxygen eventually becomes slow due to formation of a protective layer. Fire extinguishers based on water accelerate sodium fires. Those based on carbon dioxide and bromochlorodifluoromethane should not be used on sodium fire. Metal fires are Class D, but not all Class D extinguishers are effective when used to extinguish sodium fires. An effective extinguishing agent for sodium fires is Met-L-X. Other effective agents include Lith-X, which has graphite powder and an organophosphate flame retardant, and dry sand.

Liquid sodium fires are more dangerous to handle than solid sodium fires, particularly if there is insufficient experience with the safe handling of molten sodium. In a technical report for the United States Fire Administration, R. J. Gordon writes (emphasis in original)

Once ignited, sodium is very difficult to extinguish. It will react violently with water, as noted previously, and with any extinguishing agent that contains water. It will also react with many other common extinguishing agents, including carbon dioxide and the halogen compounds and most dry chemical agents. The only safe and effective extinguishing agents are completely dry inert materials, such as Class D extinguishing agents, soda ash, graphite, diatomaceous earth, or sodium chloride, all of which can be used to bury a small quantity of burning sodium and exclude oxygen from reaching the metal.

The extinguishing agent must be absolutely dry, as even a trace of water in the material can react with the burning sodium to cause an explosion. Sodium chloride is recognized as an extinguishing medium because of its chemical stability, however it is hydroscopic (has the property of attracting and holding water molecules on the surface of the salt crystals) and must be kept absolutely dry to be used safely as an extinguishing agent. Every crystal of sodium chloride also contains a trace quantity of moisture within the structure of the crystal.

Molten sodium is extremely dangerous because it is much more reactive than a solid mass. In the liquid form, every sodium atom is free and mobile to instantaneously combine with any available oxygen atom or other oxidizer, and any gaseous by-product will be created as a rapidly expanding gas bubble within the molten mass. Even a minute amount of water can create this type of reaction. Any amount of water introduced into a pool of molten sodium is likely to cause a violent explosion inside the liquid mass, releasing the hydrogen as a rapidly expanding gas and causing the molten sodium to erupt from the container.

When molten sodium is involved in a fire, the combustion occurs at the surface of the liquid. An inert gas, such as nitrogen or argon, can be used to form an inert layer over the pool of burning liquid sodium, but the gas must be applied very gently and contained over the surface. Except for soda ash, most of the powdered agents that are used to extinguish small fires in solid pieces or shallow pools will sink to the bottom of a molten mass of burning sodium — the sodium will float to the top and continue to burn. If the burning sodium is in a container, it may be feasible to extinguish the fire by placing a lid on the container to exclude oxygen.

€20,16 €25,00 με ΦΠΑ 330190
Iodine (25gr) Iodine is a chemical element with the symbol I and atomic number 53. The heaviest of the stable halogens, it exists as a semi-lustrous, non-metallic solid at standard
Add to wishlist
Add to cart
Quick view