Sulfur (or sulphur in British English) is a chemical element with the symbol S and atomic number 16. It is abundant, multivalent and nonmetallic. Under normal conditions, sulfur atoms form cyclic octatomic molecules with a chemical formula S8. Elemental sulfur is a bright yellow, crystalline solid at room temperature.

Sulfur is the tenth most abundant element by mass in the universe and the fifth most on Earth. Though sometimes found in pure, native form, sulfur on Earth usually occurs as sulfide and sulfate minerals. Being abundant in native form, sulfur was known in ancient times, being mentioned for its uses in ancient India, ancient Greece, China, and ancient Egypt. Historically and in literature sulfur is also called brimstone, which means “burning stone”. Today, almost all elemental sulfur is produced as a byproduct of removing sulfur-containing contaminants from natural gas and petroleum. The greatest commercial use of the element is the production of sulfuric acid for sulfate and phosphate fertilizers, and other chemical processes. Sulfur is used in matches, insecticides, and fungicides. Many sulfur compounds are odoriferous, and the smells of odorized natural gas, skunk scent, grapefruit, and garlic are due to organosulfur compounds. Hydrogen sulfide gives the characteristic odor to rotting eggs and other biological processes.

Sulfur is an essential element for all life, but almost always in the form of organosulfur compounds or metal sulfides. Amino acids (two proteinogenic: cysteine and methionine, and many other non-coded: cystine, taurine, etc.) and two vitamins (biotin and thiamine) are organosulfur compounds crucial for life. Many cofactors also contain sulfur, including glutathione, and iron–sulfur proteins. Disulfides, S–S bonds, confer mechanical strength and insolubility of the (among others) protein keratin, found in outer skin, hair, and feathers. Sulfur is one of the core chemical elements needed for biochemical functioning and is an elemental macronutrient for all living organisms. 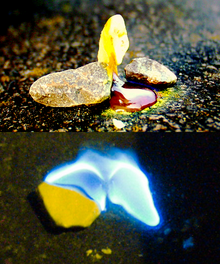 As a solid, sulfur is a characteristic lemon yellow; when burned, sulfur melts into a blood-red liquid and emits a blue flame.

Sulfur forms several polyatomic molecules. The best-known allotrope is octasulfur, cyclo-S8. The point group of cyclo-S8 is D4d and its dipole moment is 0 D. Octasulfur is a soft, bright-yellow solid that is odorless, but impure samples have an odor similar to that of matches. It melts at 115.21 °C (239.38 °F), boils at 444.6 °C (832.3 °F) and sublimates easily. At 95.2 °C (203.4 °F), below its melting temperature, cyclo-octasulfur changes from α-octasulfur to the β-polymorph. The structure of the S8 ring is virtually unchanged by this phase change, which affects the intermolecular interactions. Between its melting and boiling temperatures, octasulfur changes its allotrope again, turning from β-octasulfur to γ-sulfur, again accompanied by a lower density but increased viscosity due to the formation of polymers. At higher temperatures, the viscosity decreases as depolymerization occurs. Molten sulfur assumes a dark red color above 200 °C (392 °F). The density of sulfur is about 2 g/cm3, depending on the allotrope; all of the stable allotropes are excellent electrical insulators.

Sulfur is insoluble in water but soluble in carbon disulfide and, to a lesser extent, in other nonpolar organic solvents, such as benzene and toluene.

The reaction involves adsorption of protons onto S8 clusters, followed by disproportionation into the reaction products.

The second, fourth and sixth ionization energies of sulfur are 2252 kJ/mol−1, 4556 kJ/mol−1 and 8495.8 kJ/mol−1,respectively. A composition of products of sulfur’s reactions with oxidants (and its oxidation state) depends on that whether releasing out of a reaction energy overcomes these thresholds. Applying catalysts and / or supply of outer energy may vary sulfur’s oxidation state and a composition of reaction products. While reaction between sulfur and oxygen at normal conditions gives sulfur dioxide (oxidation state +4), formation of sulfur trioxide (oxidation state +6) requires temperature 400 – 600 °C and presence of a catalyst.

In reactions with elements electronegativity of which less than sulfur’s, it comes as an oxidant, and forms sulfides with oxidation state –2.

Sulfur reacts with nearly all other elements with the exception of the noble gases, even with the notoriously unreactive metal iridium (yielding iridium disulfide). Some of those reactions need elevated temperatures. 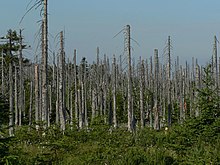 Elemental sulfur is non-toxic, as are most of the soluble sulfate salts, such as Epsom salts. Soluble sulfate salts are poorly absorbed and laxative. When injected parenterally, they are freely filtered by the kidneys and eliminated with very little toxicity in multi-gram amounts. Aluminium sulfate is used in the purification of drinking water, wastewater treatment plants and papermaking.

When sulfur burns in air, it produces sulfur dioxide. In water, this gas produces sulfurous acid and sulfites; sulfites are antioxidants that inhibit growth of aerobic bacteria and a useful food additive in small amounts. At high concentrations these acids harm the lungs, eyes, or other tissues. In organisms without lungs such as insects or plants, sulfite in high concentration prevents respiration.

Sulfur trioxide (made by catalysis from sulfur dioxide) and sulfuric acid are similarly highly acidic and corrosive in the presence of water. Sulfuric acid is a strong dehydrating agent that can strip available water molecules and water components from sugar and organic tissue.

The burning of coal and/or petroleum by industry and power plants generates sulfur dioxide (SO2) that reacts with atmospheric water and oxygen to produce sulfuric acid (H2SO4) and sulfurous acid (H2SO3). These acids are components of acid rain, lowering the pH of soil and freshwater bodies, sometimes resulting in substantial damage to the environment and chemical weathering of statues and structures. Fuel standards increasingly require that fuel producers extract sulfur from fossil fuels to prevent acid rain formation. This extracted and refined sulfur represents a large portion of sulfur production. In coal-fired power plants, flue gases are sometimes purified. More modern power plants that use synthesis gas extract the sulfur before they burn the gas.

Hydrogen sulfide is as toxic as hydrogen cyanide, and kills by the same mechanism (inhibition of the respiratory enzyme cytochrome oxidase), though hydrogen sulfide is less likely to cause surprise poisonings from small inhaled amounts because of its disagreeable odor. Hydrogen sulfide quickly deadens the sense of smell and a victim may breathe increasing quantities without noticing the increase until severe symptoms cause death. Dissolved sulfide and hydrosulfide salts are toxic by the same mechanism.

€24,19 €30,00 με ΦΠΑ 330062
Calcium metal granules 100gr Calcium is a chemical element with the symbol Ca and atomic number 20. As an alkaline earth metal, calcium is a reactive metal that forms
Add to wishlist
Add to cart
Quick view

€40,32 €50,00 με ΦΠΑ 330510
Copper wire (500gr)
Add to wishlist
Add to cart
Quick view
Shopping cart
close
We use cookies to improve your experience on our website. By browsing this website, you agree to our use of cookies.
Accept