Aniline is an organic compound with the formula C6H5NH2. Consisting of a phenyl group attached to an amino group, aniline is the simplest aromatic amine. It is an industrially significant commodity chemical, as well as a versatile starting material for fine chemical synthesis. Its main use is in the manufacture of precursors to polyurethane, dyes, and other industrial chemicals. Like most volatile amines, it has the odor of rotten fish. It ignites readily, burning with a smoky flame characteristic of aromatic compounds. It is toxic to humans.

Relative to benzene, it is electron-rich. It thus participates more rapidly in electrophilic aromatic substitution reactions. Likewise, it is also prone to oxidation: while freshly purified aniline is an almost colorless oil, exposure to air results in gradual darkening to yellow or red, due to the formation of strongly colored, oxidized impurities. Aniline can be diazotized to give a diazonium salt, which can then undergo various nucleophilic substitution reactions.

Like other amines, aniline is both a base (pKaH = 4.6) and a nucleophile, although less so than structurally similar aliphatic amines.

Because an early source of the benzene from which they are derived was coal tar, aniline dyes are also called coal tar dyes.

In aniline, the C−N bond length is 1.41 Å, compared to 1.47 Å for cyclohexylamine, indicating partial π-bonding between N and C. The C(aryl)-NH2 distance in anilines is highly sensitive to substituent effects. This distance is 1.34 Å in 2,4,6-trinitroaniline vs 1.44 Å in 3-methylaniline.

The amine in anilines is a slightly pyramidalized molecule, with hybridization of the nitrogen somewhere between sp3 and sp2. The nitrogen is described as having high p character. The amino group in aniline is flatter (i.e., it is a “shallower pyramid”) than that in an aliphatic amine, owing to conjugation of the lone pair with the aryl substituent. The observed geometry reflects a compromise between two competing factors: 1) stabilization of the N lone pair in an orbital with significant s character favors pyramidalization (orbitals with s character are lower in energy), while 2) delocalization of the N lone pair into the aryl ring favors planarity (a lone pair in a pure p orbital gives the best overlap with the orbitals of the benzene ring π system).

The pyramidalization angle between the C–N bond and the bisector of the H–N–H angle is 142.5°. For comparison, in more strongly pyramidal methylamine, this value is ~125°, while that of formamide has an angle of 180°.

Aniline is predominantly used for the preparation of methylenedianiline and related compounds by condensation with formaldehyde. The diamines are condensed with phosgene to give methylene diphenyl diisocyanate, a precursor to urethane polymers.[6]

Most aniline is consumed in the production of methylenedianiline, a precursor to polyurethanes.

Other uses include rubber processing chemicals (9%), herbicides (2%), and dyes and pigments (2%).[21] As additives to rubber, aniline derivatives such as phenylenediamines and diphenylamine, are antioxidants. Illustrative of the drugs prepared from aniline is paracetamol (acetaminophen, Tylenol). The principal use of aniline in the dye industry is as a precursor to indigo, the blue of blue jeans.[6] 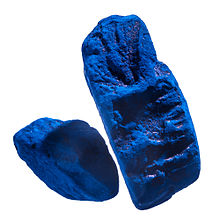 Cake of indigo dye, which is prepared from aniline.

Aniline was first isolated in 1826 by Otto Unverdorben by destructive distillation of indigo. He called it Crystallin. In 1834, Friedlieb Runge isolated a substance from coal tar that turned a beautiful blue color when treated with chloride of lime. He named it kyanol or cyanol. In 1840, Carl Julius Fritzsche (1808–1871) treated indigo with caustic potash and obtained an oil that he named aniline, after an indigo-yielding plant, anil (Indigofera suffruticosa). In 1842, Nikolay Nikolaevich Zinin reduced nitrobenzene and obtained a base that he named benzidam. In 1843, August Wilhelm von Hofmann showed that these were all the same substance, known thereafter as phenylamine or aniline.

In 1856, while trying to synthesise quinine, von Hofmann‘s student William Henry Perkin discovered mauveine and went into industry producing the first commercial synthetic dye. Other aniline dyes followed, such as fuchsin, safranin, and induline. At the time of mauveine’s discovery, aniline was expensive. Soon thereafter, applying a method reported in 1854 by Antoine Béchamp, it was prepared “by the ton”. The Béchamp reduction enabled the evolution of a massive dye industry in Germany. Today, the name of BASF, originally Badische Anilin- und Soda-Fabrik (English: Baden Aniline and Soda Factory), now the largest chemical supplier, echoes the legacy of the synthetic dye industry, built via aniline dyes and extended via the related azo dyes. The first azo dye was aniline yellow.

In the late 19th century, derivatives of aniline such as acetanilide and phenacetin emerged as analgesic drugs, with their cardiac-suppressive side effects often countered with caffeine. During the first decade of the 20th century, while trying to modify synthetic dyes to treat African sleeping sickness, Paul Ehrlich – who had coined the term chemotherapy for his magic bullet approach to medicine – failed and switched to modifying Béchamp‘s atoxyl, the first organic arsenical drug, and serendipitously obtained a treatment for syphilis – salvarsan – the first successful chemotherapy agent. Salvarsan’s targeted microorganism, not yet recognized as a bacterium, was still thought to be a parasite, and medical bacteriologists, believing that bacteria were not susceptible to the chemotherapeutic approach, overlooked Alexander Fleming‘s report in 1928 on the effects of penicillin.

Bayer, in 1932 sought medical applications of its dyes. Gerhard Domagk identified as an antibacterial a red azo dye, introduced in 1935 as the first antibacterial drug, prontosil, soon found at Pasteur Institute to be a prodrug degraded in vivo into sulfanilamide – a colorless intermediate for many, highly colorfast azo dyes – already with an expired patent, synthesized in 1908 in Vienna by the researcher Paul Gelmo for his doctoral research. By the 1940s, over 500 related sulfa drugs were produced. Medications in high demand during World War II (1939–45), these first miracle drugs, chemotherapy of wide effectiveness, propelled the American pharmaceutics industry. At Oxford University, in 1932, seeking an alternative to sulfa drugs, Howard Florey developed Fleming’s penicillin into the first systemic antibiotic drug, penicillin G. (Gramicidin, developed by René Dubos at Rockefeller Institute in 1939, was the first antibiotic, yet its toxicity restricted it to topical use.) After World War II, Cornelius P. Rhoads introduced the chemotherapeutic approach to cancer treatment.

Some early American rockets, such as the Aerobee and WAC Corporal, used a mixture of aniline and furfuryl alcohol as a fuel, with nitric acid as an oxidizer. The combination is hypergolic, igniting on contact between fuel and oxidizer. It is also dense, and can be stored for extended periods. Aniline was later replaced by hydrazine.

€14,80 €18,35 με ΦΠΑ 330912
Fehling 2B 1lt Fehling 2B 1lt
Add to wishlist
Add to cart
Quick view
Shopping cart
close
We use cookies to improve your experience on our website. By browsing this website, you agree to our use of cookies.
Accept