Castor oil is a vegetable oil pressed from castor beans.[1] Castor oil is a colourless to very pale yellow liquid with a distinct taste and odor. Its boiling point is 313 °C (595 °F) and its density is 0.961 g/cm3.[2] It includes a mixture of triglycerides in which approximately 90 percent of fatty acid chains are ricinoleates. Oleate and linoleates are the other significant components. 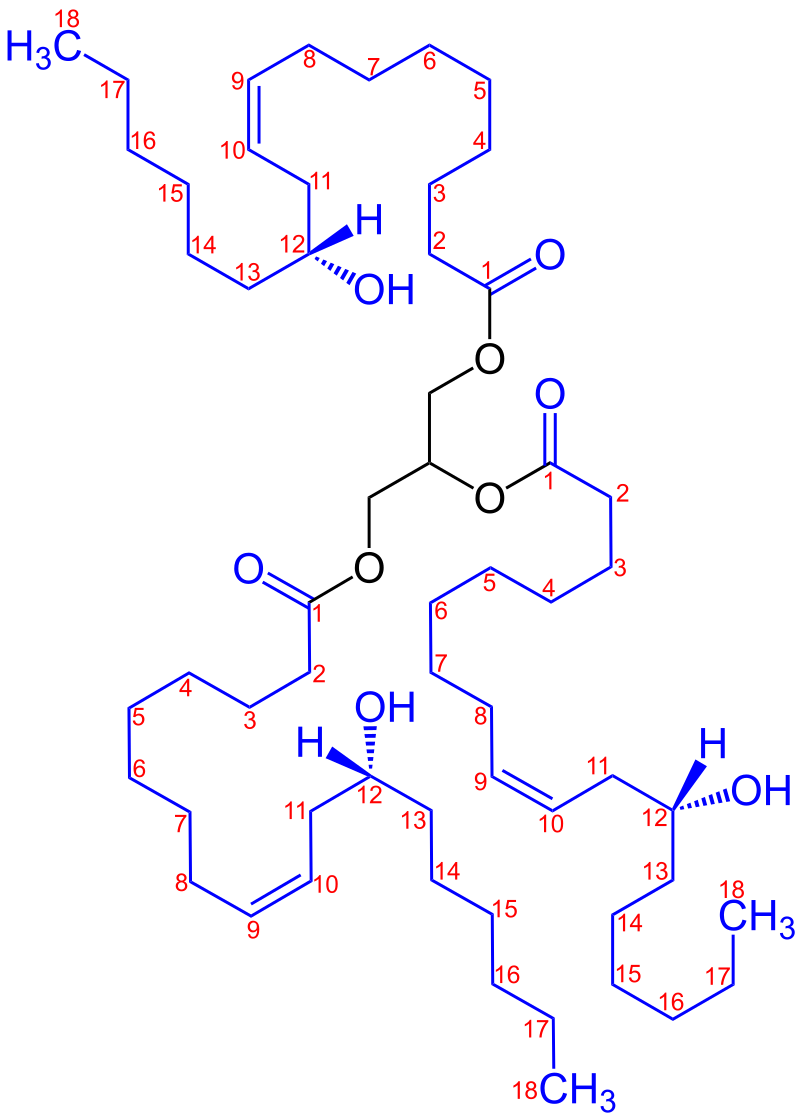 Keep it in dry and cool place

The castor seed contains ricin, a toxic lectin. Heating during the oil extraction process denatures and deactivates the lectin. However, harvesting castor beans may not be without risk.[58] The International Castor Oil Association FAQ document states that castor beans contain an allergenic compound called CB1A. This chemical is described as being virtually non-toxic but has the capacity to sensitize people with hypersensitivity. The allergen may be neutralized by treatment with a variety of alkaline agents. The allergen is not present in the castor oil itself. These health issues, in addition to concerns about the toxic byproduct (ricin) from castor oil production, have encouraged the quest for alternative sources for hydroxy fatty acids.[59][60] Alternatively, some researchers are trying to genetically modify the castor plant to prevent the synthesis of ricin.[61]

In the food industry, food grade castor oil is used in food additives, flavorings, candy (e.g., polyglycerol polyricinoleate or PGPR in chocolate),[8] as a mold inhibitor, and in packaging. Polyoxyethylated castor oil (e.g., Kolliphor EL)[9] is also used in the food industries.[10]

In India, Pakistan and Nepal food grains are preserved by the application of castor oil. It stops rice, wheat, and pulses from rotting. For example, the legume pigeon pea is commonly available coated in oil for extended storage.

Use of castor oil as a laxative is attested to in the circa 1550 BC Ebers Papyrus,[11] and was in use several centuries earlier.[12] The United States Food and Drug Administration (FDA) has categorized castor oil as “generally recognized as safe and effective” (GRASE) for over-the-counter use as a laxative with its major site of action the small intestine, where it is digested into ricinoleic acid.[13]

Although used in traditional medicine to induce labor in pregnant women, there is insufficient evidence that castor oil is effective to dilate the cervix or induce labor.[14]

Castor oil, or a castor oil derivative such as Kolliphor EL (polyethoxylated castor oil, a nonionic surfactant), is an excipient added to prescription drugs, including:

Castor oil is also one of the components of Vishnevsky liniment.[23]

In naturopathy, castor oil is promoted as a treatment for several human health conditions,[24] including cysts. According to the American Cancer Society, “available scientific evidence does not support claims that castor oil on the skin cures cancer or any other disease.”[25]

Castor oil has been used in cosmetic products included in creams and as a moisturizer. Small amounts of castor oil are frequently used in cold process soap to increase lathering in the finished bar. It also has been used to enhance hair conditioning in other products and for supposed anti-dandruff properties.[26]

Castor oil is used as a bio-based polyol in the polyurethane industry. The average functionality (number of hydroxyl groups per triglyceride molecule) of castor oil is 2.7, so it is widely used as a rigid polyol and in coatings.[1] One particular use is in a polyurethane concrete where a castor-oil emulsion is reacted with an isocyanate (usually polymeric MDI methylene diphenyl diisocyanate) and a cement and construction aggregate. This is applied fairly thickly as a slurry which is self-levelling. This base is usually further coated with other systems to build a resilient floor.[27]

It is not a drying oil, meaning that it has a low reactivity with air compared to oils such as linseed oil and tung oil. Dehydration of castor oil yields linoleic acids, which do have drying properties.[1] In this process, the OH group on the ricinoleic acid along with a hydrogen from the next carbon atom are removed yielding a double bond which then has oxidative cross-linking properties yielding the drying oil.

€64,90 €80,48 με ΦΠΑ 330395
Triethylamine 2,5lt
Add to wishlist
Add to cart
Quick view
Shopping cart
close
We use cookies to improve your experience on our website. By browsing this website, you agree to our use of cookies.
Accept