Dimethyl sulfoxide (DMSO) is an organosulfur compound with the formula (CH3)2SO. This colorless liquid is an important polar aprotic solvent that dissolves both polar and nonpolar compounds and is miscible in a wide range of organic solvents as well as water. It has a relatively high boiling point. DMSO has the unusual property that many individuals perceive a garlic-like taste in the mouth after DMSO makes contact with their skin.

In terms of chemical structure, the molecule has idealized Cs symmetry. It has a trigonal pyramidal molecular geometry consistent with other three-coordinate S(IV) compounds, with a nonbonded electron pair on the approximately tetrahedral sulfur atom. 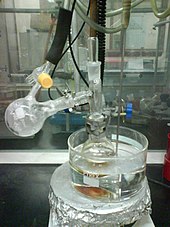 Distillation of DMSO requires a partial vacuum to achieve a lower boiling point.

DMSO is a polar aprotic solvent and is less toxic than other members of this class, such as dimethylformamide, dimethylacetamide, N-methyl-2-pyrrolidone, and hexamethylphosphoramide (HMPA). DMSO is frequently used as a solvent for chemical reactions involving salts, most notably Finkelstein reactions and other nucleophilic substitutions. It is also extensively used as an extractant in biochemistry and cell biology. Because DMSO is only weakly acidic, it tolerates relatively strong bases and as such has been extensively used in the study of carbanions. A set of non-aqueous pKa values (C-H, O-H, S-H and N-H acidities) for thousands of organic compounds have been determined in DMSO solution.

Because of its high boiling point, 189 °C (372 °F), DMSO evaporates slowly at normal atmospheric pressure. Samples dissolved in DMSO cannot be as easily recovered compared to other solvents, as it is very difficult to remove all traces of DMSO by conventional rotary evaporation. One technique to fully recover samples is removal of the organic solvent by evaporation followed by addition of water (to dissolve DMSO) and cryodesiccation to remove both DMSO and water. Reactions conducted in DMSO are often diluted with water to precipitate or phase-separate products. The relatively high freezing point of DMSO, 18.5 °C (65.3 °F), means that at, or just below, room temperature it is a solid, which can limit its utility in some chemical processes (e.g. crystallization with cooling).

In its deuterated form (DMSO-d6), it is a useful solvent for NMR spectroscopy, again due to its ability to dissolve a wide range of analytes, the simplicity of its own spectrum, and its suitability for high-temperature NMR spectroscopic studies. Disadvantages to the use of DMSO-d6 are its high viscosity, which broadens signals, and its hygroscopicity, which leads to an overwhelming H2O resonance in the 1H-NMR spectrum. It is often mixed with CDCl3 or CD2Cl2 for lower viscosity and melting points.

DMSO is used as a solvent in in vitro and in vivo drug testing.

DMSO is also used to dissolve test compounds in in vitro drug discovery and drug design screening programs, including high-throughput screening programs. This is because it is able to dissolve both polar and nonpolar compounds, can be used to maintain stock solutions of test compounds (important when working with a large chemical library), is readily miscible with water and cell culture media, and has a high boiling point (this improves the accuracy of test compound concentrations by reducing room temperature evaporation). One limitation with DMSO is that it can affect cell line growth and viability, with low DMSO concentrations sometimes stimulating cell growth, and high DMSO concentrations sometimes inhibiting or killing cells.

DMSO is used as a vehicle in in vivo studies of test compounds too. It has, for example, been employed as a co-solvent to assist absorption of the flavonol glycoside Icariin in the nematode worm Caenorhabditis elegans. As with its use in in vitro studies, DMSO has some limitations in animal models. Pleiotropic effects can occur and, if DMSO control groups are not carefully planned, then solvent effects can falsely be attributed to the prospective drug. For example, even a very low dose of DMSO has a powerful protective effect against paracetamol (acetaminophen)-induced liver injury in mice.

In addition to the above, DMSO is finding increased use in manufacturing processes to produce microelectronic devices. It is widely used to strip photoresist in TFT-LCD ‘flat panel’ displays and advanced packaging applications (such as wafer-level packaging / solder bump patterning). DMSO is an effective paint stripper too, being safer than many of the others such as nitromethane and dichloromethane.

Early clinical trials with DMSO were stopped because of questions about its safety, especially its ability to harm the eye. The most commonly reported side effects include headaches and burning and itching on contact with the skin. Strong allergic reactions have been reported. DMSO can cause contaminants, toxins, and medicines to be absorbed through the skin, which may cause unexpected effects. DMSO is thought to increase the effects of blood thinners, steroids, heart medicines, sedatives, and other drugs. In some cases this could be harmful or dangerous.

In Australia, it is listed as a Schedule 4 (S4) Drug, and a company has been prosecuted for adding it to products as a preservative.

Because DMSO easily penetrates the skin, substances dissolved in DMSO may be quickly absorbed. Glove selection is important when working with DMSO. Butyl rubber, fluoroelastomer, neoprene, or thick (15 mil / 0.4  mm) latex gloves are recommended. Nitrile gloves, which are very commonly used in chemical laboratories, may protect from brief contact but have been found to degrade rapidly with exposure to DMSO.

On September 9, 1965, The Wall Street Journal reported that a manufacturer of the chemical warned that the death of an Irish woman after undergoing DMSO treatment for a sprained wrist may have been due to the treatment, although no autopsy was done, nor was a causal relationship established. Clinical research using DMSO was halted and did not begin again until the National Academy of Sciences (NAS) published findings in favor of DMSO in 1972. In 1978, the US FDA approved DMSO for treating interstitial cystitis. In 1980, the US Congress held hearings on claims that the FDA was slow in approving DMSO for other medical uses. In 2007, the US FDA granted “fast track” designation on clinical studies of DMSO’s use in reducing brain tissue swelling following traumatic brain injury. DMSO exposure to developing mouse brains can produce brain degeneration. This neurotoxicity could be detected at doses as low as 0.3 mL/kg, a level exceeded in children exposed to DMSO during bone marrow transplant.

DMSO disposed into sewers can also cause odor problems in municipal effluents: waste water bacteria transform DMSO under hypoxic (anoxic) conditions into dimethyl sulfide (DMS) that has a strong disagreeable odor, similar to rotten cabbage. However, chemically pure DMSO is odorless because of the lack of C-S-C (sulfide) and C-S-H (mercaptan) linkages. Deodorization of DMSO is achieved by removing the odorous impurities it contains.

Dimethyl sulfoxide can produce an explosive reaction when exposed to acyl chlorides; at a low temperature, this reaction produces the oxidant for Swern oxidation.

DMSO can decompose at the boiling temperature of 189 °C at normal pressure, possibly leading to an explosion. The decomposition is catalyzed by acids and bases and therefore can be relevant at even lower temperatures. A strong to explosive reaction also takes place in combination with halogen compounds, metal nitrides, metal perchlorates, sodium hydride, periodic acid and fluorinating agents.

€56,45 €70,00 με ΦΠΑ 330103
DMSO 99,5% 1lt Dimethyl Sulfoxide, Methylsulfinylmethane, Methyl sulfoxide C2H6OS M.W: 78.13 g·mol−1 Cas Number: 67-68-5 https://pubchem.ncbi.nlm.nih.gov/compound/Dimethyl-sulfoxide
Add to wishlist
Add to cart
Quick view
Shopping cart
close
We use cookies to improve your experience on our website. By browsing this website, you agree to our use of cookies.
Accept