Pepsin /ˈpɛpsɪn/ is an endopeptidase that breaks down proteins into smaller peptides. It is produced in the gastric chief cells of the stomach lining and is one of the main digestive enzymes in the digestive systems of humans and many other animals, where it helps digest the proteins in food. Pepsin is an aspartic protease, using a catalytic aspartate in its active site.

It is one of three principal endopeptidases (enzymes cutting proteins in the middle) in the human digestive system, the other two being chymotrypsin and trypsin. There are also exopeptidases which remove individual amino acids at both ends of proteins (carboxypeptidases produced by the pancreas and aminopeptidases secreted by the small intestine). During the process of digestion, these enzymes, each of which is specialized in severing links between particular types of amino acids, collaborate to break down dietary proteins into their components, i.e., peptides and amino acids, which can be readily absorbed by the small intestine. The cleavage specificity of pepsin is broad, but some amino acids like tyrosine, phenylalanine and tryptophan increase the probability of cleavage.

Pepsin’s proenzyme, pepsinogen, is released by the gastric chief cells in the stomach wall, and upon mixing with the hydrochloric acid of the gastric juice, pepsinogen activates to become pepsin. 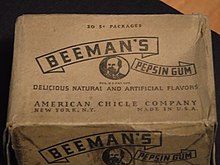 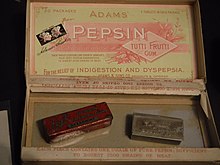 Commercial pepsin is extracted from the glandular layer of hog stomachs. It is a component of rennet used to curdle milk during the manufacture of cheese. Pepsin is used for a variety of applications in food manufacturing: to modify and provide whipping qualities to soy protein and gelatin, to modify vegetable proteins for use in nondairy snack items, to make precooked cereals into instant hot cereals, and to prepare animal and vegetable protein hydrolysates for use in flavoring foods and beverages. It is used in the leather industry to remove hair and residual tissue from hides and in the recovery of silver from discarded photographic films by digesting the gelatin layer that holds the silver. Pepsin was historically an additive of Beeman’s gum brand chewing gum by Dr. Edwin E. Beeman.

Pepsin is commonly used in the preparation of F(ab’)2 fragments from antibodies. In some assays, it is preferable to use only the antigen-binding (Fab) portion of the antibody. For these applications, antibodies may be enzymatically digested to produce either an Fab or an F(ab’)2 fragment of the antibody. To produce an F(ab’)2 fragment, IgG is digested with pepsin, which cleaves the heavy chains near the hinge region. One or more of the disulfide bonds that join the heavy chains in the hinge region are preserved, so the two Fab regions of the antibody remain joined together, yielding a divalent molecule (containing two antibody binding sites), hence the designation F(ab’)2. The light chains remain intact and attached to the heavy chain. The Fc fragment is digested into small peptides. Fab fragments are generated by cleavage of IgG with papain instead of pepsin. Papain cleaves IgG above the hinge region containing the disulfide bonds that join the heavy chains, but below the site of the disulfide bond between the light chain and heavy chain. This generates two separate monovalent (containing a single antibody binding site) Fab fragments and an intact Fc fragment. The fragments can be purified by gel filtration, ion exchange, or affinity chromatography.

Fab and F(ab’)2 antibody fragments are used in assay systems where the presence of the Fc region may cause problems. In tissues such as lymph nodes or spleen, or in peripheral blood preparations, cells with Fc receptors (macrophages, monocytes, B lymphocytes, and natural killer cells) are present which can bind the Fc region of intact antibodies, causing background staining in areas that do not contain the target antigen. Use of F(ab’)2 or Fab fragments ensures that the antibodies are binding to the antigen and not Fc receptors. These fragments may also be desirable for staining cell preparations in the presence of plasma, because they are not able to bind complement, which could lyse the cells. F(ab’)2, and to a greater extent Fab, fragments allow more exact localization of the target antigen, i.e., in staining tissue for electron microscopy. The divalency of the F(ab’)2 fragment enables it to cross-link antigens, allowing use for precipitation assays, cellular aggregation via surface antigens, or rosetting assays. €9,68 €12,00 με ΦΠΑ 330030
Acetone 500ml Acetone, propanone or dimethyl ketone, is an organic compound with the formula (CH3)2CO. It is the simplest and smallest ketone. It is a colourless, highly volatile and
Add to wishlist
Add to cart
Quick view
Shopping cart
close
We use cookies to improve your experience on our website. By browsing this website, you agree to our use of cookies.
Accept