Pyridine is a basic heterocyclic organic compound with the chemical formula C5H5N. It is structurally related to benzene, with one methine group (=CH−) replaced by a nitrogen atom. It is a highly flammable, weakly alkaline, water-miscible liquid with a distinctive, unpleasant fish-like smell. Pyridine is colorless, but older or impure samples can appear yellow. The pyridine ring occurs in many important compounds, including agrochemicals, pharmaceuticals, and vitamins. Historically, pyridine was produced from coal tar. As of 2016, it is synthesized on the scale of about 20,000 tons per year worldwide.

Pyridine is a toxic, flammable liquid with a strong and unpleasant fishy odour. Its odour threshold of 0.04 to 20 ppm is close to its threshold limit of 5 ppm for adverse effects, thus most (but not all) adults will be able to tell when it is present at harmful levels. Pyridine easily dissolves in water and harms both animals and plants in aquatic systems.

Pyridine has a flash point of 17 °C and is therefore highly flammable. Combustion produces toxic fumes which can include bipyridines, nitrogen oxides, and carbon monoxide.

Pyridine can cause chemical burns on contact with the skin and its fumes may be irritating to the eyes or upon inhalation. Pyridine depresses the nervous system giving symptoms akin to intoxication with vapor concentrations of above 3600 ppm pose a greater health risk. The effects may have a delayed onset of several hours and include dizziness, headache, lack of coordination, nausea, salivation, and loss of appetite. They may progress into abdominal pain, pulmonary congestion and unconsciousness. The lowest known lethal dose (LDLo) for the ingestion of pyridine in humans is 500 mg·kg−1.

Prolonged exposure to pyridine may result in liver, heart and kidney damage. Evaluations as a possible carcinogenic agent showed that there is inadequate evidence in humans for the carcinogenicity of pyridine, although there is sufficient evidence in experimental animals. Therefore, IARC considers pyridine as possibly carcinogenic to humans (Group 2B).

Trace amounts of up to 16 µg·m−3 have been detected in tobacco smoke. Minor amounts of pyridine are released into environment from some industrial processes such as steel manufacture, processing of oil shale, coal gasification, coking plants and incinerators. The atmosphere at oil shale processing plants can contain pyridine concentrations of up to 13 µg·m−3,[110] and 53 µg·m−3 levels were measured in the groundwater in the vicinity of a coal gasification plant. According to a study by the US National Institute for Occupational Safety and Health, about 43,000 Americans work in contact with pyridine.

Pyridine has historically been added to foods to give them a bitter flavour, although this practise is now banned in the U.S. It may still be added to ethanol to make it unsuitable for drinking. 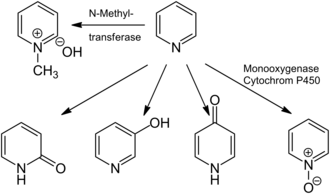 Exposure to pyridine would normally lead to its inhalation and absorption in the lungs and gastrointestinal tract, where it either remains unchanged or is metabolized. The major products of pyridine metabolism are N-methylpyridiniumhydroxide, which are formed by N-methyltransferases (e.g., pyridine N-methyltransferase), as well as pyridine N-oxide, and 2-, 3-, and 4-hydroxypyridine, which are generated by the action of monooxygenase. In humans, pyridine is metabolized only into N-methylpyridiniumhydroxide.

Pyridine is readily degraded by bacteria to ammonia and carbon dioxide. The unsubstituted pyridine ring degrades more rapidly than picoline, lutidine, chloropyridine, or aminopyridines, and a number of pyridine degraders have been shown to overproduce riboflavin in the presence of pyridine. Ionizable N-heterocyclic compounds, including pyridine, interact with environmental surfaces (such as soils and sediments) via multiple pH-dependent mechanisms, including partitioning to soil organic matter, cation exchange, and surface complexation. Such adsorption to surfaces reduces bioavailability of pyridines for microbial degraders and other organisms, thus slowing degradation rates and reducing ecotoxicity

€7,80 €9,67 με ΦΠΑ 330700
[:en] Litmus Solution (100ml) [:]
Add to wishlist
Add to cart
Quick view
Shopping cart
close
We use cookies to improve your experience on our website. By browsing this website, you agree to our use of cookies.
Accept