Starch or amylum is a polymeric carbohydrate consisting of numerous glucose units joined by glycosidic bonds. This polysaccharide is produced by most green plants for energy storage. Worldwide, it is the most common carbohydrate in human diets, and is contained in large amounts in staple foods such as wheat, potatoes, maize (corn), rice, and cassava (manioc).

Pure starch is a white, tasteless and odorless powder that is insoluble in cold water or alcohol. It consists of two types of molecules: the linear and helical amylose and the branched amylopectin. Depending on the plant, starch generally contains 20 to 25% amylose and 75 to 80% amylopectin by weight. Glycogen, the energy reserve of animals, is a more highly branched version of amylopectin.

In industry, starch is converted into sugars, for example by malting, and fermented to produce ethanol in the manufacture of beer, whisky and biofuel. It is processed to produce many of the sugars used in processed foods. Mixing most starches in warm water produces a paste, such as wheatpaste, which can be used as a thickening, stiffening or gluing agent. The greatest industrial non-food use of starch is as an adhesive in the papermaking process. § Clothing starch can be applied to certain textile goods before ironing, to stiffen them. 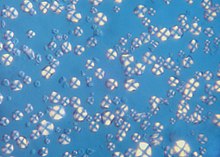 Rice starch seen on light microscope. Characteristic for the rice starch is that starch granules have an angular outline and some of them are attached to each other and form larger granules

While amylose was thought to be completely unbranched, it is now known that some of its molecules contain a few branch points. Amylose is a much smaller molecule than amylopectin. About one quarter of the mass of starch granules in plants consist of amylose, although there are about 150 times more amylose than amylopectin molecules.

Starch Soluble molecules arrange themselves in the plant in semi-crystalline granules. Each plant species has a unique starch granular size: rice starch is relatively small (about 2 μm), potato starches have larger granules (up to 100 μm) and wheat and tapioca all in-between. Unlike other botanical sources of starch, wheat starch has a bimodal size distribution, with both smaller and larger granules ranging from 2 to 55 μm.

Some cultivated plant varieties have pure amylopectin starch without amylose, known as waxy starches. The most used is waxy maize, others are glutinous rice and waxy potato starch. Waxy starches have less retrogradation, resulting in a more stable paste. High amylose starch, amylomaize, is cultivated for the use of its gel strength and for use as a resistant starch (a starch that resists digestion) in food products.

Synthetic amylose made from cellulose has a well-controlled degree of polymerization. Therefore, it can be used as a potential drug deliver carrier.

Starch Soluble is the most common carbohydrate in the human diet and is contained in many staple foods. The major sources of starch intake worldwide are the cereals (rice, wheat, and maize) and the root vegetables (potatoes and cassava). Many other starchy foods are grown, some only in specific climates, including acorns, arrowroot, arracacha, bananas, barley, breadfruit, buckwheat, canna, colocasia, katakuri, kudzu, malanga, millet, oats, oca, polynesian arrowroot, sago, sorghum, sweet potatoes, rye, taro, chestnuts, water chestnuts and yams, and many kinds of beans, such as favas, lentils, mung beans, peas, and chickpeas.

Before processed foods, people consumed large amounts of uncooked and unprocessed starch-containing plants, which contained high amounts of resistant starch. Microbes within the large intestine ferment or consume the starch, producing short-chain fatty acids, which are used as energy, and support the maintenance and growth of the microbes. Upon cooking, starch is transformed from an insoluble, difficult-to-digest granule into readily accessible glucose chains with very different nutritional and functional properties.

In current diets, highly processed foods are more easily digested and release more glucose in the small intestine—less starch reaches the large intestine and more energy is absorbed by the body. It is thought that this shift in energy delivery (as a result of eating more processed foods) may be one of the contributing factors to the development of metabolic disorders of modern life, including obesity and diabetes.

The amylose/amylopectin ratio, molecular weight and molecular fine structure influences the physicochemical properties as well as energy release of different types of starches. In addition, cooking and food processing significantly impacts starch digestibility and energy release. Starch has been classified as rapidly digestible starch, slowly digestible starch and resistant starch, depending upon its digestion profile. Raw starch granules resist digestion by human enzymes and do not break down into glucose in the small intestine – they reach the large intestine instead and function as prebiotic dietary fiber. When starch granules are fully gelatinized and cooked, the starch becomes easily digestible and releases glucose quickly within the small intestine. When starchy foods are cooked and cooled, some of the glucose chains re-crystallize and become resistant to digestion again. Slowly digestible starch can be found in raw cereals, where digestion is slow but relatively complete within the small intestine. Widely used prepared foods containing starch are bread, pancakes, cereals, noodles, pasta, porridge and tortilla.

During cooking with high heat, sugars released from starch can react with amino acids via the Maillard reaction, forming advanced glycation end-products, (AGEs), contributing aromas, flavors and texture to foods. One example of a dietary AGE is acrylamide. Recent evidence suggests that the intestinal fermentation of dietary AGEs may be associated with insulin resistance, atherosclerosis, diabetes and other inflammatory diseases. This may be due to the impact of AGEs on intestinal permeability.

Papermaking is the largest non-food application for starches globally, consuming many millions of metric tons annually. In a typical sheet of copy paper for instance, the starch content may be as high as 8%. Both chemically modified and unmodified starches are used in papermaking. In the wet part of the papermaking process, generally called the “wet-end”, the starches used are cationic and have a positive charge bound to the starch polymer. These starch derivatives associate with the anionic or negatively charged paper fibers / cellulose and inorganic fillers. Cationic starches together with other retention and internal sizing agents help to give the necessary strength properties to the paper web formed in the papermaking process (wet strength), and to provide strength to the final paper sheet (dry strength).

In the dry end of the papermaking process, the paper web is rewetted with a starch based solution. The process is called surface sizing. Starches used have been chemically, or enzymatically depolymerized at the paper mill or by the starch industry (oxidized starch). The size/starch solutions are applied to the paper web by means of various mechanical presses (size presses). Together with surface sizing agents the surface starches impart additional strength to the paper web and additionally provide water hold out or “size” for superior printing properties. Starch is also used in paper coatings as one of the binders for the coating formulations which include a mixture of pigments, binders and thickeners. Coated paper has improved smoothness, hardness, whiteness and gloss and thus improves printing characteristics.