Vanillin is an organic compound with the molecular formula C8H8O3. It is a phenolic aldehyde. Its functional groups include aldehyde, hydroxyl, and ether. It is the primary component of the extract of the vanilla bean. Synthetic vanillin is now used more often than natural vanilla extract as a flavoring in foods, beverages, and pharmaceuticals.

Natural vanilla extract is a mixture of several hundred different compounds in addition to vanillin. Artificial vanilla flavoring is often a solution of pure vanillin, usually of synthetic origin. Because of the scarcity and expense of natural vanilla extract. Synthetic preparation of its predominant component has long been of interest. The first commercial synthesis of vanillin began with the more readily available natural compound eugenol (4-allyl-2-methoxyphenol). Today, artificial vanillin is made either from guaiacol or lignin. 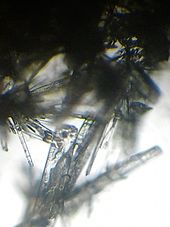 Lignin-based artificial vanilla flavoring is alleged to have a richer flavor profile than oil-based flavoring; the difference is due to the presence of acetovanillone, a minor component in the lignin-derived product that is not found in vanillin synthesized from guaiacol. 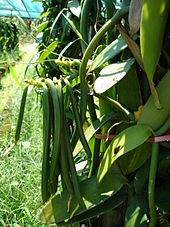 These green seed pods contain vanillin only in its glucoside form, and lack the characteristic odor of vanilla.

Vanillin is most prominent as the principal flavor and aroma compound in vanilla. Cured vanilla pods contain about 2% by dry weight vanillin; on cured pods of high quality, relatively pure vanillin may be visible as a white dust or “frost” on the exterior of the pod.

It is also found in Leptotes bicolor, a species of orchid native to Paraguay and southern Brazil, and the Southern Chinese red pine.

At lower concentrations, vanillin contributes to the flavor and aroma profiles of foodstuffs as diverse as olive oil, butter, raspberry, and lychee fruits.

Aging in oak barrels imparts vanillin to some wines, vinegar, and spirits.

In other foods, heat treatment generates vanillin from other compounds. In this way, vanillin contributes to the flavor and aroma of coffee,[23][24] maple syrup,[25] and whole-grain products, including corn tortillas and oatmeal.

Natural vanillin is extracted from the seed pods of Vanilla planifolia, a vining orchid native to Mexico, but now grown in tropical areas around the globe. Madagascar is presently the largest producer of natural vanillin.

As harvested, the green seed pods contain vanillin in the form of its β-d–glucoside; the green pods do not have the flavor or odor of vanilla.

Vanillin can trigger migraine headaches in a small fraction of the people who experience migraines.

Some people have allergic reactions to vanilla. They may be allergic to synthetically produced vanilla but not to natural vanilla, or the other way around, or to both

A pseudophytodermatitis called vanilla lichen can be caused by tiny mites.

€58,80 €72,91 με ΦΠΑ 330005
Adipoyl chloride 111-50-2 HEXANEDIOYL DICHLORIDE Adipoyl dichloride Adipyl chloride M.W. 183.03
Add to wishlist
Add to cart
Quick view
Shopping cart
close
We use cookies to improve your experience on our website. By browsing this website, you agree to our use of cookies.
Accept