Calcium carbonate is a chemical compound with the formula CaCO3. It is a common substance found in rocks as the minerals calcite and aragonite (most notably as limestone, which is a type of sedimentary rock consisting mainly of calcite) and is the main component of eggshells, gastropod shells, shellfish skeletons and pearls. Calcium carbonate is the active ingredient in agricultural lime and is created when calcium ions in hard water react with carbonate ions to create limescale. It has medical use as a calcium supplement or as an antacid, but excessive consumption can be hazardous and cause hypercalcemia and digestive issues.

Calcium carbonate shares the typical properties of other carbonates. Notably it

Calcium carbonate reacts with water that is saturated with carbon dioxide to form the soluble calcium bicarbonate.

This reaction is important in the erosion of carbonate rock, forming caverns, and leads to hard water in many regions.

An unusual form of calcium carbonate is the hexahydrate ikaite, CaCO3·6H2O. Ikaite is stable only below 8 °C.

The vast majority of calcium carbonate used in industry is extracted by mining or quarrying. Pure calcium carbonate (such as for food or pharmaceutical use), can be produced from a pure quarried source (usually marble).

The thermodynamically stable form of CaCO3 under normal conditions is hexagonal β-CaCO3 (the mineral calcite). Other forms can be prepared, the denser (2.83 g/cm3) orthorhombic λ-CaCO3 (the mineral aragonite) and hexagonal μ-CaCO3, occurring as the mineral vaterite. The aragonite form can be prepared by precipitation at temperatures above 85 °C; the vaterite form can be prepared by precipitation at 60 °C. Calcite contains calcium atoms coordinated by six oxygen atoms; in aragonite they are coordinated by nine oxygen atoms. The vaterite structure is not fully understood. Magnesium carbonate (MgCO3) has the calcite structure, whereas strontium carbonate (SrCO3) and barium carbonate (BaCO3) adopt the aragonite structure, reflecting their larger ionic radii. 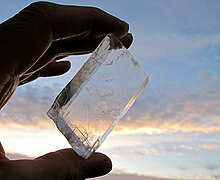 Calcite is the most stable polymorph of calcium carbonate. It is transparent to opaque. A transparent variety called Iceland spar (shown here) was used to create polarized light in the 19th century.

The main use of calcium carbonate is in the construction industry, either as a building material, or limestone aggregate for road building, as an ingredient of cement, or as the starting material for the preparation of builders’ lime by burning in a kiln. However, because of weathering mainly caused by acid rain, calcium carbonate (in limestone form) is no longer used for building purposes on its own, but only as a raw primary substance for building materials.

Calcium carbonate is also used in the purification of iron from iron ore in a blast furnace. The carbonate is calcined in situ to give calcium oxide, which forms a slag with various impurities present, and separates from the purified iron.

In the oil industry, calcium carbonate is added to drilling fluids as a formation-bridging and filtercake-sealing agent; it is also a weighting material which increases the density of drilling fluids to control the downhole pressure. Calcium carbonate is added to swimming pools, as a pH corrector for maintaining alkalinity and offsetting the acidic properties of the disinfectant agent.

It is also used as a raw material in the refining of sugar from sugar beet; it is calcined in a kiln with anthracite to produce calcium oxide and carbon dioxide. This burnt lime is then slaked in fresh water to produce a calcium hydroxide suspension for the precipitation of impurities in raw juice during carbonatation.

Calcium carbonate in the form of chalk has traditionally been a major component of blackboard chalk. However, modern manufactured chalk is mostly gypsum, hydrated calcium sulfate CaSO4·2H2O. Calcium carbonate is a main source for growing biorock. Precipitated calcium carbonate (PCC), pre-dispersed in slurry form, is a common filler material for latex gloves with the aim of achieving maximum saving in material and production costs.

€16,13 €20,00 με ΦΠΑ 330295
Sodium Oxalate 250gr nNa2C2O4
Add to wishlist
Add to cart
Quick view
Shopping cart
close
We use cookies to improve your experience on our website. By browsing this website, you agree to our use of cookies.
Accept