As suggested by the existence of some hydrates, anhydrous MgCl2 is a Lewis acid, although a weak one.

It can also be prepared from magnesium carbonate by a similar reaction.

Derivatives with tetrahedral Mg2+ are less common. Examples include salts like tetraethylammonium tetrachloromagnesate [N(CH2CH3)4]2[MgCl4] and adducts such as MgCl2(TMEDA).

Anhydrous MgCl2 is the main precursor to metallic magnesium. The reduction of Mg2+ into metallic Mg is performed by electrolysis in molten salt.[5][7] As it is also the case for aluminium, an electrolysis in aqueous solution is not possible as the produced metallic magnesium would immediately react with water, or in other words that the water H+ would be reduced into gaseous H2 before Mg reduction could occur. So, the direct electrolysis of molten MgCl2 in the absence of water is required because the reduction potential to obtain Mg is lower than the stability domain of water on an Eh–pH diagram (Pourbaix diagram).

The production of metallic magnesium at the cathode (reduction reaction) is accompanied by the oxidation of the chloride anions at the anode with release of gaseous chlorine. This process is developed at a large industrial scale.

Magnesium chloride is one of many substances used for dust control, soil stabilization, and wind erosion mitigation. When magnesium chloride is applied to roads and bare soil areas, both positive and negative performance issues occur which are related to many application factors.

Ziegler-Natta catalysts, used commercially to produce polyolefins, contain MgCl2 as a catalyst support. The introduction of MgCl2 supports increases the activity of traditional catalysts and allowed the development of highly stereospecific catalysts for the production of polypropylene. 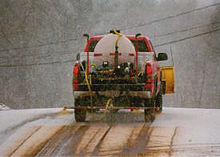 Magnesium chloride is used for low-temperature de-icing of highways, sidewalks, and parking lots. When highways are treacherous due to icy conditions, magnesium chloride helps to prevent the ice bond to the pavement, allowing snow plows to clear the roads more efficiently.

Magnesium chloride is used in nutraceutical and pharmaceutical preparations.

Magnesium chloride (E511) is an important coagulant used in the preparation of tofu from soy milk.

In Japan it is sold as nigari (にがり, derived from the Japanese word for “bitter”), a white powder produced from seawater after the sodium chloride has been removed, and the water evaporated. In China, it is called lushui (卤水).

Nigari or Iushui is, in fact, natural magnesium chloride, meaning that it is not completely refined (it contains up to 5% magnesium sulfate and various minerals). The crystals originate from lakes in the Chinese province of Qinghai, to be then reworked in Japan. Millions of years ago, this region was home to an ancient ocean that gradually dried up and of which only salty lakes with brackish water saturated with salt where magnesium chloride crystallizes remain today.

It is an inexpensive dietary supplement providing magnesium, hence its interest in view of a general deficit in our current consumption (to be in full health, the human body must in particular benefit from a balance between calcium and magnesium). It is also an ingredient in baby formula milk.

It has been found that higher concentrations of magnesium in tomato and some pepper plants can make them more susceptible to disease caused by infection of the bacterium Xanthomonas campestris, since magnesium is essential for bacterial growth. 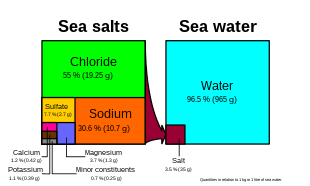 Magnesium concentrations in natural seawater are between 1250 and 1350 mg/l, around 3.7% of the total seawater mineral content. Dead Sea minerals contain a significantly higher magnesium chloride ratio, 50.8%. Carbonates and calcium are essential for all growth of corals, coralline algae, clams, and invertebrates. Magnesium can be depleted by mangrove plants and the use of excessive limewater or by going beyond natural calcium, alkalinity, and pH values. The most common mineral form of magnesium chloride is its hexahydrate, bischofite. Anhydrous compound occurs very rarely, as chloromagnesite. Magnesium chloride-hydroxides, korshunovskite and nepskoeite, are also very rare.

Magnesium ions are bitter-tasting, and magnesium chloride solutions are bitter in varying degrees, depending on the concentration.

Magnesium toxicity from magnesium salts is rare in healthy individuals with a normal diet, because excess magnesium is readily excreted in urine by the kidneys. A few cases of oral magnesium toxicity have been described in persons with normal renal function ingesting large amounts of magnesium salts, but it is rare. If a large amount of magnesium chloride is eaten, it will have effects similar to magnesium sulfate, causing diarrhea, although the sulfate also contributes to the laxative effect in magnesium sulfate, so the effect from the chloride is not as severe.

Chloride (Cl−) and magnesium (Mg2+) are both essential nutrients important for normal plant growth. Too much of either nutrient may harm a plant, although foliar chloride concentrations are more strongly related with foliar damage than magnesium. High concentrations of MgCl2 ions in the soil may be toxic or change water relationships such that the plant cannot easily accumulate water and nutrients. Once inside the plant, chloride moves through the water-conducting system and accumulates at the margins of leaves or needles, where dieback occurs first. Leaves are weakened or killed, which can lead to the death of the tree.

The presence of dissolved magnesium chloride in the well water (bore water) used in locomotive boilers on the Trans-Australian Railway caused serious and expensive maintenance problems during the steam era. At no point along its route does the line cross a permanent freshwater watercourse, so bore water had to be relied on. No inexpensive treatment for the highly mineralised water was available, and locomotive boilers were lasting less than a quarter of the time normally expected. In the days of steam locomotion, about half the total train load was water for the engine. The line’s operator, Commonwealth Railways, was an early adopter of the diesel-electric locomotive.

€33,60 €41,66 με ΦΠΑ 330326
Lead (IV) Acetate (25gr)
Add to wishlist
Add to cart
Quick view
Shopping cart
close
We use cookies to improve your experience on our website. By browsing this website, you agree to our use of cookies.
Accept