Tin(II) chloride, also known as stannous chloride, is a white crystalline solid with the formula SnCl2. It forms a stable dihydrate, but aqueous solutions tend to undergo hydrolysis, particularly if hot. SnCl2 is widely used as a reducing agent (in acid solution), and in electrolytic baths for tin-plating. Tin(II) chloride should not be confused with the other chloride of tin; tin(IV) chloride or stannic chloride (SnCl4).

SnCl2 has a lone pair of electrons, such that the molecule in the gas phase is bent. In the solid state, crystalline SnCl2 forms chains linked via chloride bridges as shown. The dihydrate is also three-coordinate, with one water coordinated on to the tin, and a second water coordinated to the first. The main part of the molecule stacks into double layers in the crystal lattice, with the “second” water sandwiched between the layers.

UsesA solution of tin(II) chloride containing a little hydrochloric acid is used for the tin-plating of steel, in order to make tin cans. An electric potential is applied, and tin metal is formed at the cathode via electrolysis.

Tin(II) chloride is used as a mordant in textile dyeing because it gives brighter colours with some dyes e.g. cochineal. This mordant has also been used alone to increase the weight of silk.

In recent years, an increasing number of tooth paste brands have been adding Tin(II) chloride as protection against enamel erosion to their formula, e. g. Oral-B or Elmex.

It is used as a catalyst in the production of the plastic polylactic acid (PLA).

It also finds a use as a catalyst between acetone and hydrogen peroxide to form the tetrameric form of acetone peroxide.

Tin(II) chloride also finds wide use as a reducing agent. This is seen in its use for silvering mirrors, where silver metal is deposited on the glass:

A related reduction was traditionally used as an analytical test for Hg2+ (aq). For example, if SnCl2 is added dropwise into a solution of mercury(II) chloride, a white precipitate of mercury(I) chloride is first formed; as more SnCl2 is added this turns black as metallic mercury is formed. Stannous chloride can be used to test for the presence of gold compounds. SnCl2 turns bright purple in the presence of gold (see Purple of Cassius).

When mercury is analyzed using atomic absorption spectroscopy, a cold vapor method must be used, and tin (II) chloride is typically used as the reductant.

In organic chemistry, SnCl2 is mainly used in the Stephen reduction, whereby a nitrile is reduced (via an imidoyl chloride salt) to an imine which is easily hydrolysed to an aldehyde.

The reaction usually works best with aromatic nitriles Aryl-CN. A related reaction (called the Sonn-Müller method) starts with an amide, which is treated with PCl5 to form the imidoyl chloride salt. 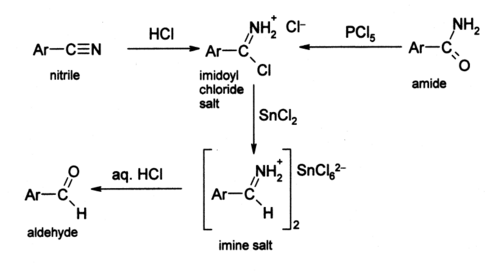 The Stephen reduction is less used today, because it has been mostly superseded by diisobutylaluminium hydride reduction.

Stannous chloride is also added as a food additive with E number E512 to some canned and bottled foods, where it serves as a color-retention agent and antioxidant.

SnCl2 is used in radionuclide angiography to reduce the radioactive agent technetium-99m-pertechnetate to assist in binding to blood cells.

Aqueous stannous chloride is used by many precious metals refining hobbyists and professionals as an indicator of gold and platinum group metals in solutions.

€4,80 €5,95 με ΦΠΑ 330730
Methyl Orange 100ml 0,04%
Add to wishlist
Add to cart
Quick view
Shopping cart
close
We use cookies to improve your experience on our website. By browsing this website, you agree to our use of cookies.
Accept