Trisodium phosphate (TSP) is the inorganic compound with the chemical formula Na3PO4. It is a white, granular or crystalline solid, highly soluble in water, producing an alkaline solution. TSP is used as a cleaning agent, builder, lubricant, food additive, stain remover, and degreaser.

The item of commerce is often partially hydrated and may range from anhydrous Na3PO4 to the dodecahydrate Na3PO4 • 12H2O. Most often found in white powder form, it can also be called trisodium orthophosphate or simply sodium phosphate. 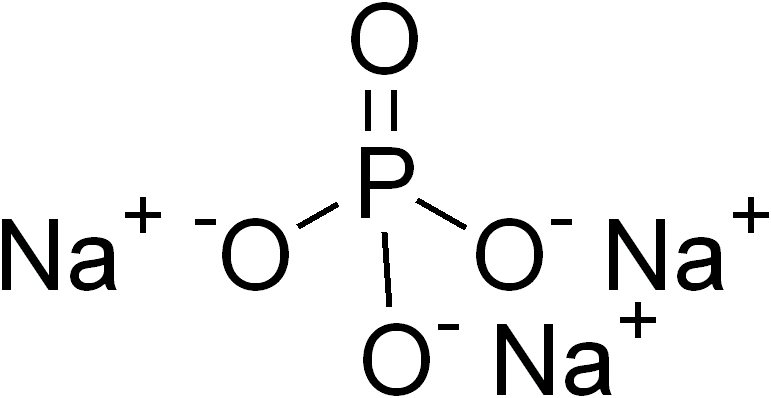 Trisodium phosphate was at one time extensively used in formulations for a variety of consumer-grade soaps and detergents, and the most common use for trisodium phosphate has been in cleaning agents. The pH of a 1% solution is 12 (i.e., very basic), and the solution is sufficiently alkaline to saponify grease and oils. In combination with surfactants, TSP is an excellent agent for cleaning everything from laundry to concrete driveways. This versatility and low manufacturing price made TSP the basis for a plethora of cleaning products sold in the mid-20th century.

TSP is still sold and used as a cleaning agent, but since the late 1960s, its use has diminished in the United States and many other parts of the world because, like many phosphate-based cleaners, it is known to cause extensive eutrophication of lakes and rivers once it enters a water system. Substitutes are generally not as effective.

TSP is commonly used after cleaning a surface with mineral spirits to remove hydrocarbon residues and may be used with household chlorine bleach in the same solution without hazardous reactions.This mixture is particularly effective for removing mildew, but is less effective at removing mold.[

Although it is still the active ingredient in some toilet bowl-cleaning tablets, TSP is generally not recommended for cleaning bathrooms because it can stain metal fixtures and can damage grout.

In the U.S., trisodium phosphate is an approved flux for use in hard soldering joints in medical-grade copper plumbing. The flux is applied as a concentrated water solution and dissolves copper oxides at the temperature used in copper brazing. Residues are water-soluble and can be rinsed out before plumbing is put into service.

TSP is used as an ingredient in fluxes designed to deoxygenate nonferrous metals for casting. It can be used in ceramic production to lower the flow point of glazes.

TSP is still in common use for the cleaning, degreasing, and deglossing of walls prior to painting. TSP breaks the gloss of oil-based paints and opens the pores of latex-based paint, providing a surface better suited for the adhesion of the subsequent layer.

€24,50 €30,38 με ΦΠΑ 330471
Sodium Dithionite (500gr)
Add to wishlist
Add to cart
Quick view
Shopping cart
close
We use cookies to improve your experience on our website. By browsing this website, you agree to our use of cookies.
Accept